My Review of Just Another High School Play 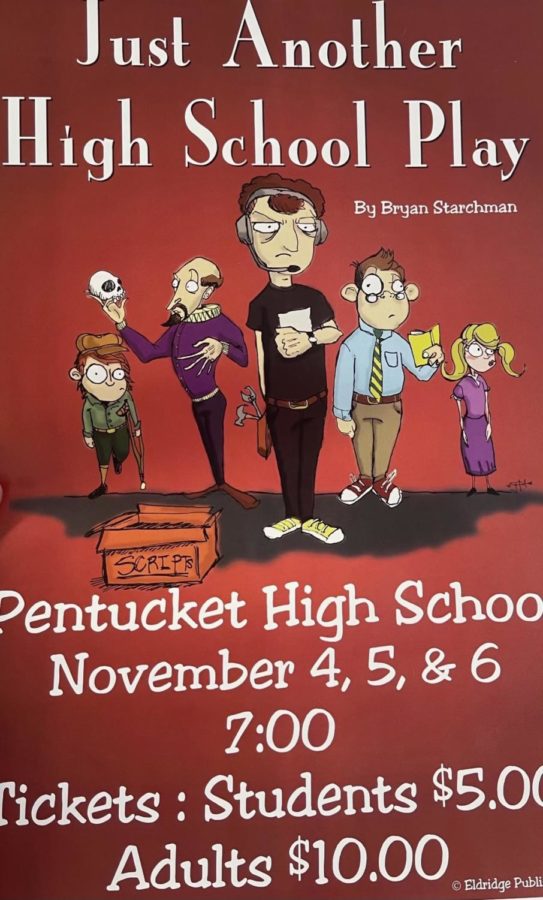 Earlier this month, the Pentucket theatre department put on its fall show called Just Another High School Play. The show was on Thursday the 4th, Friday the 5th, and Saturday the 6th at 7 p.m in the auditorium. As a member of the theatre department, I was very excited to see this play. I’m close with almost everyone that was in the play, so I thought writing a review from my point of view would be interesting. Here are my thoughts on the play:

The plot of the play was a high school theatre cast who was about to put on their fall show, but all of a sudden, on opening night, their director quit. The stage manager and assistant director then decided to take matters into their own hands and do the best they could with putting the show on.

Each scene in the play was a little spoof of classic plays, such as Little Women and Romeo and Juliet. Since the idea of doing spoofs of classic plays was rushed, the characters didn’t have much time to prepare or memorize their lines. In certain scenes, there would be a character who broke character (but they were still technically in character because they had lines for the play) and they would be themselves and mess up their lines. It was all on purpose, of course, but it was very funny.

There were appropriate sets and costumes that worked well with each scene. There were funny sound effects, and music that gave the play a little more character. I really liked this concept of the play, it was very different from any Pentucket play I’ve seen. All in all, I think my favorite thing about this play was how every cast member was able to showcase their own talents.

The play had a smaller cast than usual, which is usually what happens in the fall. The two lead roles were perfectly casted with Kara Keene and Emily Brankman portraying them. I know both on a personal level and the characters they played fitted each of them very well.. Keene played the  goofy and stylish assistant director while Brankman played the “leader” and more controlled stage manager. Everyone else played themselves as well as whichever character they were in the specific scene.

A majority of the cast members were seniors, and I think this play really allowed them to get their own special moment while doing one of their last Pentucket shows. Senior Jett Haryslak’s talents were showcased as he sang and danced. Haryslak also had some hilarious one-liners, which he is known to nail. Senior Spencer Magan showcased his musical talent with his piano solo. Magan is a very talented musician and this play allowed him to show that off to everyone.

My only complaint about this play is that everyone should have been microphoned. There were many scenes where it was very hard to hear what the actors were saying. With that being said, I do know that Pentucket’s microphones and technology are a little hard to work with. The play was very funny and light-hearted which was a perfect way to kick off the beginning of the 2021-2022 school year, and a perfect way to bring us back to live performances!