PSA: It’s Still Not Cool or Good for You. 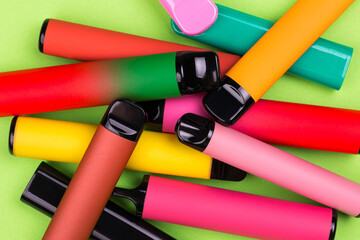 An old fad, right? Apparently not. Even with the excessive research that has come out since vaping first became popular, one in three kids in Massachusetts vapes. Taking a step into a Pentucket bathroom gives you a sneak peek at this ongoing problem.

As frustrating as it is to admit, the vape companies have gotten what they wanted and targeted teens whose brains are still developing. If you are curious, visit a vaping website or even a vape shop and you will see bright-colored cartridges and pods. Chances are, you will also see fun flavors such as bubblegum, candy, or even children’s cereals.

What is Vape Juice?

Along with flavoring, vape juice usually contains nicotine, as well as other addictive chemicals. The article, Vape Flavors and Vape Juice: What you need to know, explains that “Even the heating coil, which allows the liquid to become an inhalable aerosol, releases new chemical substances and trace metals that go into the user’s lungs.” The wide variety of concoctions within vape juice is concerning, especially because substances such as dyes, THC, and essential oils have been found in the liquid.

Although some substances such as Vitamin E are safe to eat, they can negatively affect the lungs when inhaled. Vapers tongue, which causes loss of taste, can also be an effect of inhaling these chemicals. Popcorn lung, also known as bronchiolitis obliterans, is a condition that is caused by damage to the small airways in the lungs. With this comes a lifetime of symptoms and no long-term treatment. Symptoms include coughing, wheezing, chest pain, and shortness of breath. The only thing you can do to avoid this awful condition is to avoid vaping.

Cancer is also a major concern but as vaping is a new problem, nobody truly knows. Expert Stephen R Broderick states, “We do know that smoking tobacco forces tiny particles to be deposited deep in the bronchial tree and can lead to the development of cancer. The same may be true for vaping”. Alongside these known results of vaping, as research is still in the beginning stages, long-term effects are unknown and most likely life-altering.

An article on ABC news explains the situation of Simah Herman, who was put on life support thanks to her vaping addiction. On what seemed like an ordinary day, Herman was suddenly positive that she was spending her last minutes on earth. After being rushed to the hospital and soon going into a coma, her cousin revealed that she had constantly been vaping. Simah came out of the coma after a few days and admitted to using her vape every 10 to 15 minutes. Herman has since recovered and started a non-vaping campaign to share her story with teenagers like her who also struggle with the problem that she once did.

“That will never happen to me” is something that the 450 victims of lung complications once said while using their vape device. As bad as 450 cases sound, there have also been six confirmed deaths connected to vaping.

If your addiction is intense enough to continue after hearing these awful stories, thankfully there are some strategies to help.

Quitting smoking or vaping is emotionally and physically hard. The first small step to take is to know exactly why you are quitting. Read articles about the harmful effects of what you have been putting into your body. This will motivate you to stop, and hopefully, you will find some disgust and disappointment within yourself and the decision you made. Think about how your relationships with friends and family have changed due to your addiction and sneakiness. On another note, the amount of money that you will save can be an exciting motivator.

Additionally, be aware of the challenges that you will most likely face when taking this large step in your life. Do not let one hard day ruin the rest. Keeping yourself busy will help to distract your brain from thinking about your cravings.

It is also important to have people alongside you during this process. Do not feel guilty about asking for help because chances are, the people closest to you also want you to quit. Talking to a doctor does not mean you will get in trouble; that is their job and they also want to help.

These steps should put you on the road to a cleaner future. Whether you or a loved one was pulled into this awful trap, there is hope and tools which will help. No matter how hard it may be, every part of the process of quitting is worth it to eventually become the best version of yourself.