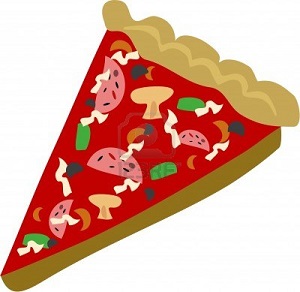 It’s a quiet day at the office today. Not a lot of work to do. Not a lot of activity going on amongst all my fellow journalists. There is some chipping away at nail polish going on. Some glancing at the clock, perhaps thinking that the glare will scare time into going faster. This is a classic, lazy Tuesday in the making.

Suddenly, a simple question gets the class going.

“Would you guys be okay if I erased the drawings on the side board?”

Everyone agrees that the cartoon pizzas on the side board can be erased. As Ms. Ducolon goes to clear away the illustrations, she comments, “I have to say, this one (pointing to the pizza with legs at the crust) looks very…”

She isn’t even able to finish. A majority of the class jumps all over her statement. Yelling erupts more powerfully than Vesuvius did on Pompeii. Battle cries are wooped. This is Pentucket gang wars at its finest.

…..Okay, okay, maybe I got a little carried away with the description, but people are VERY passionate about their opinions on whether a pizza would walk on its tip or its crust.

Beebe Jackson emphatically claims, “With it walking on its crust, it looks like a Christmas tree!” Clearly a pizza is not a Christmas tree. She believes it has to walk on the tip.

Gwen Albert is of the opposing opinion. She fires back, “Just think about the physics of it. How is the pizza walking on its tip supposed to stay up with the heaviest part on top?”

Clearly, the creative juices are flowing. Cam Silveira loudly states, “You can’t bring the physics into it when it’s a walking piece of pizza. It just looks better on its tip.”

So there you have it. The survivor’s account of the latest debate in the pizza wars.

Have an opinion? Leave a comment or vote in the poll!