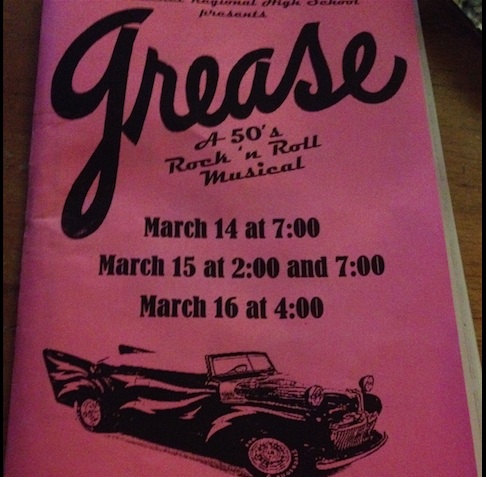 Pentucket High School put on the musicalGrease this past weekend, and it was an interesting experience. Nevertheless, I was excited to see this “50’s Rock ‘n Roll Musical.’

​I always have high hopes for Pentucket musicals, since every single one I’ve seen so far has been amazing. I thought Grease was going to be no different, but it was lacking in many departments. I’m not saying it was awful, but it was not my favorite musical I’ve seen here at Pentucket

The biggest problem I had were the accents. While I understood why they were there I felt like most of them were forced out of the actors. They seemed way too cheesy, and it took away from the show. Most of them sounded like New Jersey accents, but they just didn’t fit with the play. With some of the actors the accents seemed to change a bit or completely go away at some points during the second act. I understand how it feels to be under those lights, but that is not an excuse to drop an accent.

​Putting accents aside, I thought most of the acting was excellent. Both leads were incredible and played their parts well. ‘Grease: The Cast List’ by Connor Perry, talks about the cast list and people’s thoughts on it. At first I was skeptical at the cast but after seeing it I loved the way it was. Everyone did a great job, especially the ensemble. The energy they put into it was great, and you could tell they were having a great time up on stage.

The hand jive scene was probably my favorite part. The dancing was amazing, and all the flips and dance made me cheer. I give kudos to the choreographers for coming up with those moves. They did an excellent job, and they got it pretty close to the movie which was cool. ​

​There was one part of the play that I will criticize and that was the first scene of the second act. It was a scene with school girls from a catholic school who practiced a sexy dance while the nuns weren’t present. It had nothing to do with Grease at all, and I still don’t understand why it was in there at all. If the intent was to show off dancers, that was done during the hand jive scene. The dancing was good, don’t get me wrong, but there was no reason for that scene to be in there. The song used, Fever by Peggy Lee, is a song that was released in the 1958, and, at least for me, it seems a little late for Grease.

​One other complaint I have, and maybe this was only for opening night, but the feedback on the microphones were giving ruined certain parts for me. Igive credit to the actors for ignoring it, but it happened too often for me to. Also at some parts it was hard to hear some actors. For instance, the beginning of ‘Grease Lighting’ I could not hear Kenickie at all. It was only at the middle of the song that I could hear him clearly. Hopefully this was fixed for the other shows.

I hate to say it, but I was disappointed at the end of the performance. It was not my favorite production, and I thought it could have been better. Without the cheesy accents I think it would have been better. One thing I will say though, I was doing the hand jive in my seat, and I found myself singing along to most of the songs, truly enjoying the enthusiasm the cast had.