Keeping Our Colors Safe–One Competition at a Time 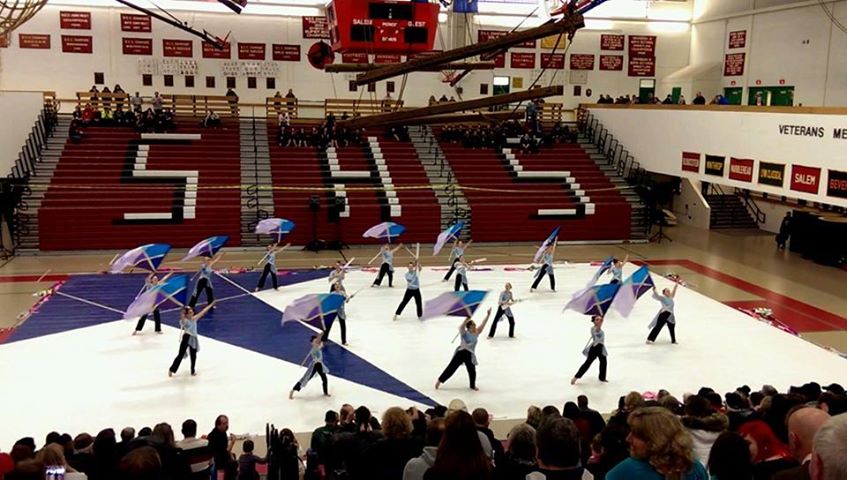 When the term ‘Color Guard’ is brought up, one may jump to questions: What are our colors and why do they need guarding? Or are they secret superheroes, tasked with keeping villains at bay who would have us live in a world devoid of color?

Those questions would likely be met by confused stares and the last one outright laughter from any person in Color Guard, but that brings up the actual, serious question of what does the Color Guard do?

“You know synchronized ice skaters? They basically do that on land,” summed up sophomore Tyler Evans in regards to Pentucket’s very own Color Guard.

They do not have the skates, that is true, nor the bedazzled outfits, but freshman Arianna Hopper affirms that they do dance a lot, and will hopefully be able to use sabers next year in their routines in addition to the flags and rifles they already wield.

Sophomore, and co-captain of  the team, Casey Saitow insisted that they’re “not just spinning flags,” and that their routines are quite complicated.

Lisa Arsenault, the director of the team, describes it as the “‘Sport of the Arts.’ It takes the equipment most commonly seen in outdoor color guard – flags, sabers, and mock rifles – and brings the action indoors to gymnasiums and professional sporting arenas.  It combine these elements with interpretive dance, movement, vivid storytelling and imaginative costumes, and what results are dynamic, athletic, and theatrical performances!

This huge commitment has been paying off: the Color Guard went undefeated in their division, Local Scholastic Regional A, comprised of eight other teams in the New England Band Association Circuit. Their only loss, by 0.7 of a point, comes from a school that was two divisions above them in a competition they entered to challenge themselves, so, as junior Selena Wedding states, “We’re pretty undefeated.”

Last weekend, they took this dominance a step further: winning the Class Title in their division.

With a final score of 94.73, a full point higher than the second place team from Mansfield, and four to five points higher than any of the other teams,  they took home the title, completing their finest performance to date, as Hopper describes it.

Although they were confident about their performance, there were still nerves present, and Hopper recalls that when the announcers “got down to sixth place, we all started holding hands and closed our eyes.”

Mrs. Arsenault could not be prouder, exclaiming that their performance “was so beautiful and executed so well.”

The routine was about “being whoever you want to be and challenging yourself to be the best you can be” as Arsenault said, to the song “The Power of Dream” by Celine Dion.

The regular season may be over, but the Color Guard will be performing at the May 8th Arts Festival, dedicating their performance to the song “America the Beautiful” to Veterans.

Hopper is looking forward to next year, speculating that, due to their outstanding performance, they may even be moved up a division next year. She also hinted that the Color Guard would be more than welcoming to new, dedicated members with no prior experience necessary *cough cough, nudge nudge* (talking to all of you athletes or dancers without a winter sport out there).

They may not battle supervillains, but what the Color Guard actually does, as well as the success they’re finding with it, are pretty cool too.