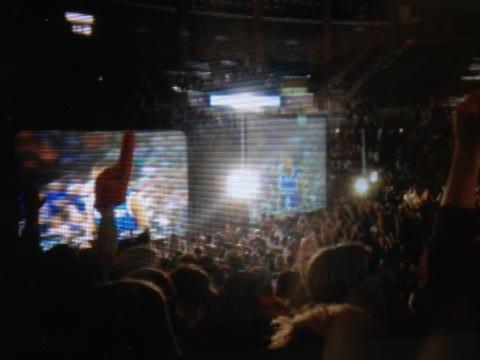 No, this is not an upcoming sequel to the widespread Hungry Hippos game, it is a quote from UCONN star senior point guard Shabazz Napier.

The Massachusetts native helped to lead his team to a National Championship win Monday night. The 7 seeded Hungry Huskies beat the only slightly peckish 8 seeded Kentucky Wildcats in a twist that no one saw coming except for the respective teams. Both teams were not even predicted to make it into the Final Four, let alone compete in the National Championship game, and, in UCONN’s case, win it.

This is even more surprising when considering that the Huskies were not even eligible to compete in the tournament last year; barred due to a failure to meet the Academic Progress Rate benchmark mandated by the NCAA back in 2007. This benchmark is to insure that athletes are successful in the classroom too, not just on the field.

Nevertheless, a vast majority of UCONN’s players stayed with the team, opting for a season with no chance of tournament play rather than transferring schools or declaring for the NBA draft. Loyalty has been  key for this team, so much so that junior guard Ryan Boatright had the word tattooed on his chest.

After emerging victorious from a tight game with Kentucky, although the latter team never took the lead, Napier took his moment on the stand with the microphone pointed at him and let his feelings be known.

“This is what happens when you ban us,” he exclaimed, after demanding the attention of everyone in attendance. This long-burning anger was no doubt brought to fruition on the world’s stage and fanned by the fact that this failure to meet academic standards happened before their time. However, if National Championships are what happen when UCONN gets banned, I’m not seeing a problem…

They did not face the adversity of a playoff ban the year before, and indeed the ladies were picked to run away with it all again, unlike their school mates, but that does not make the win any less impressive.

Facing up against their noted rivals and the only other undefeated team, Notre Dame, who had bested the Huskies seven times out of their last nine meetings, the girls were determined to bring two National Championship trophies back to the Storrs, Connecticut campus.

UCONN dominated the game, from start to finish, taking the fight right out of the Fighting Irish.

The campus, as one can expect, went absolutely crazy both nights, as students watched the games live in Gampel Pavilion (the teams’ home court) and subsequently could not contain their excitement.

My inside source on campus, Marissa Audy, a freshman, attested to this via text at 1:30 the night of the boy’s win. “THE ENTIRE CAMPUS WAS INSANE IT WAS SO MUCH FUN!!!” she exclaimed, and then went on to add that it was “THE MOST EXCITING INTENSE CRAZY FUN GAME IVE EVER EXPERIENXED IN MY LIFE I LOVE UCONN.” College students are apparently too lazy to put in correct spelling and punctuation, but there you have it.

She admits that everyone was crazier for the men’s team, but that can be attributed to the fact that no one really expected the men’s team to win; plenty of people were hoping, but the only people with a wholehearted belief in their imminent victory seemed to be the players and coaches for the men’s team.

The women’s team, renowned for greatness in the NCAA are expected to consistently win and take home championships. The 40-0 thing is new though, as is Coach Auriemma passing beloved Tennessee coach Pat Summitt for the most championship wins.

The other incentive to the student’s madness was the fact that their school had both the men’s and women’s teams win the championship in the same year. As Audy proudly declared, “That’s only ever happened once before in NCAA history.”

“Who was the first team to do this?,” you may ask.