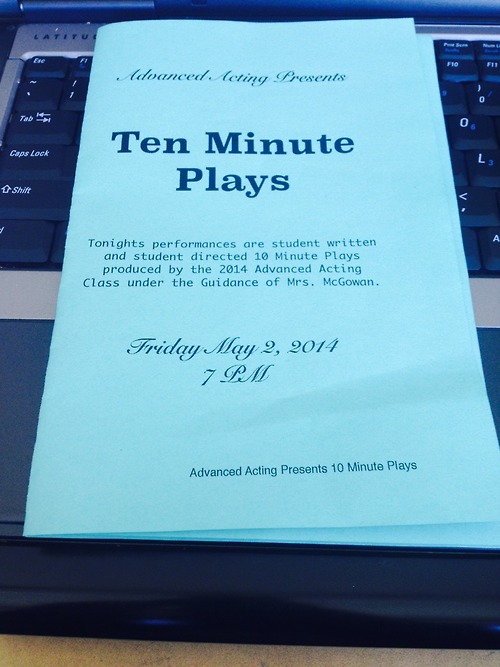 Friday, May 2nd saw an outburst of creativity, laughter, and tears at Pentucket Regional High School.

The source of this was the Advanced Acting class’ student-directed (and for some, written) Ten Minute Plays.

The tears were often from laughing, although the final two plays did produce a few wet eyes in the auditorium.

Starring junior Olivia Spofford and senior Cam Silveira, along with senior Alan Barlow, this onslaught of adorableness showed the courtship of an aspiring writer and a flower shop owner through the alternating eyes of both parties. Both are bumbling at best when it comes to romance, but the only bad thing about this play was the way my sides hurt after it from laughing so much.

Following that was director Julia Fahey’s “Gifted,” starring senior Emily Daroga and freshman Sami Jones. Jones is a mother, obsessed with the fact that her children be considered ‘gifted,’ no matter the cost to their financial situation. Daroga is the patient admissions counselor who helped Jones reassess her priorities.

Next was Tayla Racca’s “Brace Yourself,” a whimsical throwback to the dreaded first day as a brace-face. Shannon Wesley and Josef Allen are the unwitting couple caught in the middle of rom-comesque confusion–all of which came about due to their respective best friends, Paige Proto and Eric Raimondi. Wesley’s character is distraught about the impact her new braces will have on her relationship with Allen’s character and hilarity ensues as the best friends are sent back and forth to bring messages, mangling their meanings beyond belief.

Junior Rachel Smith’s “Six Ways to Make a Guy Fall in Love With You” was the last play before the intermission. Smith’s play–that she wrote herself–did not have meddling best friends, but it did have a meddling magazine (bet you can’t say that five times fast). Freshman Caroline Beauparlant’s character Heather has been in love with junior Tim Boyd’s character Spencer since kindergarten. Heather’s best friend Alice, as played by freshman Michaela Wells, intends to do something about this and tells Heather to follow the six steps to make Spencer fall in love with her. One bruised foot, bumped noggin, and several “awww’s” from the audience later, the magazine is tossed out the window.

After the brief intermission was Kade Burch’s “Heart of Hearing,” a heartbreaking look into an on-again, off-again couple. Starring Joe Raimondi and Amelia Luke, this play did not go for funny, but that was okay. It shined in its own right, showing the love that the two characters have for each other, especially when Burch’s actors set their phones down and joined each other in the scene. The highlight of this play was the moment in which the two actors danced with each other to their love song, but following this, their story was filled with nothing but sadness and loneliness for the pair of them.

Connor Durkin’s “The Wedding Story” was a glorious mash-up of fairy tale meets reality. Junior Kevin Lundy is trying to tell a bedtime story about a couple’s perfect wedding and equally perfect life together. However, the characters are less than cooperative, objecting to certain…liberties Lundy takes with the tale. Madison Begin and Jack Donahue star as the happy, or not-so-happy, couple and nearly drive Lundy to pull out his long locks.

Phoebe Law’s “The First Fireworks,” brought the auditorium to silence, depicting the all too real situation of a dying parent. Gwen Bellamy dons a gray wig for her role as an elderly and ailing soon-to-be grandmother. She sneaks out of the hospital on New Year’s Eve, leaving her anxious husband and doctor to worry about the outcome if she is not found in time to take her medicine.

Bellamy’s character does not want that, however. She wants to watch the fireworks with her daughter  one last time. And she does.

Rounding off the show was Matt Thompson’s “The Reaper in Passing,” also known as the previously mentioned 20 minute play, the second of two student written plays. It did not feel as though it was twenty minutes though. Sure, I wanted junior Ben Joyall, otherwise known as the Grim Reaper, to speak a little faster–but that was simply part of his character and glorious accent–otherwise I was totally engrossed in this play, despite the length.

It’s a busy day on the job for Grim: he’s got a couple whiners, one who refuses to believe he’s dead (break out star Tyler Evans who just about stole the show); Gwen Albert, a scientist who questions everything under the sun (or whatever they have in the limbo in which Grim exists); and Nate Joyall, an old man who has long since come to terms with his death and has been eagerly awaiting the day in which he can see his wife again.

Although sad and serious in nature, which caused some to worry as to whether closing the night on a sad note was a good idea, the play had its hilarious moments, and the ending was nothing but hopeful as the non-cloaked, -hooded, and -scythe-carrying Joyall’s character regained the ability to walk without his cane, just in time to meet his wife.

Overall, they were wonderfully acted, beautifully written, and expertly directed.