The Twisted Art of “Slut Shaming” 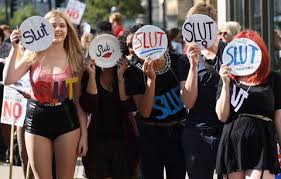 Slut Shaming: the act of scolding, bullying, or making a girl feel embarrassed because of her sexuality, sexual presence, and demeanor- whether or not she is sexually active.  In the year of 2014, with all the new types of people, ideas, and gay rights; slut shaming remains a bitter force in the lives of many women nation-wide.

Slut shaming takes on many forms and its target can be a whole slew of people, trampling everyone in its path.  In 2013, 306,000 tweets were sent per minute due to the provocative Miley Cyrus performance on the MTV Video Music Awards. This is the form of slut shaming that takes on the form of name calling; it occurs when others direct negative and vulgar names to one individual.

This form of slut shaming also takes place here, in Pentucket High School. In an interview with an anonymous student she claims, “I have been called a number of names because of the way I dress or act.  If you were a short skirt you’re a ‘whore,’ and if you cover up your body you’re a ‘prude.’  You can’t win.”

Although people might use name calling as a way to joke around, or not to take seriously, people can take these things personally.  The same Pentucket student later said, “It kills me inside when people call me names like that.  Especially when I was younger, I used to cry to my mother.  Now, I feel like I’m used to it, which is sad; that isn’t something you should have to get used to.”

However, slut shaming can also take on an indirect form, influencing things girls should (or should not) do in order to be classified as a “lady.”

Another anonymous Pentucket girl says “I feel like a lot of people do this.  Telling you to pull up your shirt, act like a ‘lady’, keep your legs closed.  But the thing is, that doesn’t really do anything for the girl they are trying to advise.  It only makes them feel like crap about themselves.”

As with most forms of bullying, Social Media has made “slut shaming” 100% easier- and more wide spread to the entire population.  Texts, photos, and experiences meant intimately for one person can reach an entire school in less than five minutes, causing everyone who has heard or seen these things look at their female peers in a bad light.

“When I was a freshman an inappropriate picture of me was sent around another school,” tells an anonymous girl, “guys were messaging me on Facebook, calling me a whore, asking me to ****.  And the thing was I was not even like that, I was pressured in to sending that picture, and afterwards everyone had this biased view of me and who I was.”

Slut shaming has bad consequences.  It can lead to girls committing suicide due to the constant bullying, and other sort of emotional problems, such as depression, distorted body image, a loss of feelings of self-worth, hyper sexuality and anxiety.  The gut-wrenching reality is that slut shaming can push people past the point of no return: death, where there is no turning back or undoing any wrongs.

Women are constant victims of this sick trend, and at times girls are even the perpetrators.  It is time to take a stand against the harsh reality that is slut shaming.  The easiest way is to report when someone is making false accusations towards you, stand up for yourself, and never use the word slut directed towards an individual; Take a stand for the women across the globe who have been victims to this and make it right.

“I would say just be able to stand up for yourself, report it when it happens and do not take part in slut shaming others. Us ladies of the world need to stand up to the slut shamers of the world and fight for our sexual rights!”