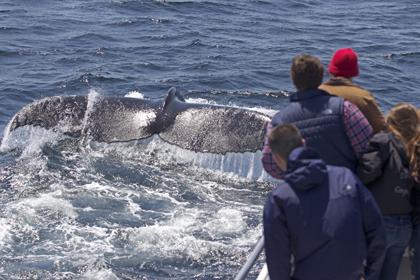 On Thursday, May 15th, the two marine bio classes went on a field trip in Gloucester to partake in a whale watch. The trip started at a little after 7:35 where the classes entered busses to embark on their journey to watch whales. The company Seven Seas Whale Watch was the hosts of this watching of whales.

The boat that would take the passengers to their destination was called the Privateer IV. The crew of the ship had to travel out a little further than expected to reach the whales, but once the ship had arrived, it was a sight to be seen.

In total there were 25-30 Humpback whales, including 3 mother calf pairs and 4 Fin whales. One very prominent sight while whale watching is the way that the whales feed. They use a technique where they would blow huge rings of bubbles around the vast schools of fish that serve as a “bubble-net” to trap the fish and keep them concentrated in one spot. After encircling the fish within these bubble nets the whales would then lunge through the middle of the ring with mouths wide open scooping up the trapped fish.

The crew of the Privateer IV stated that it is not common to see the amount of whales that the marine bio classes saw.

Pentucket Senior Spencer Kresge explained, “It was a really cool trip. I actually enjoyed it a lot and the coolest part was the bubble ring the whale used to feed.”

Braydem Carney, Pentnucket Junior, also explained “I would definitely go on another whale watch. It was pretty awesome.”

“It was certainly an encouraging sign to see so many whales on Stellwagen Bank so early in the season” stated the Seven Seas Whale Watch official website.

After an hour of watching whales the ship had to turn back and head towards port. Although they had to cut the watching of whales a little short, the amount of activity in the water made up for it. For those that like watching whales then Seven Seas Whale Watch is a great whale watch to watch the whales.