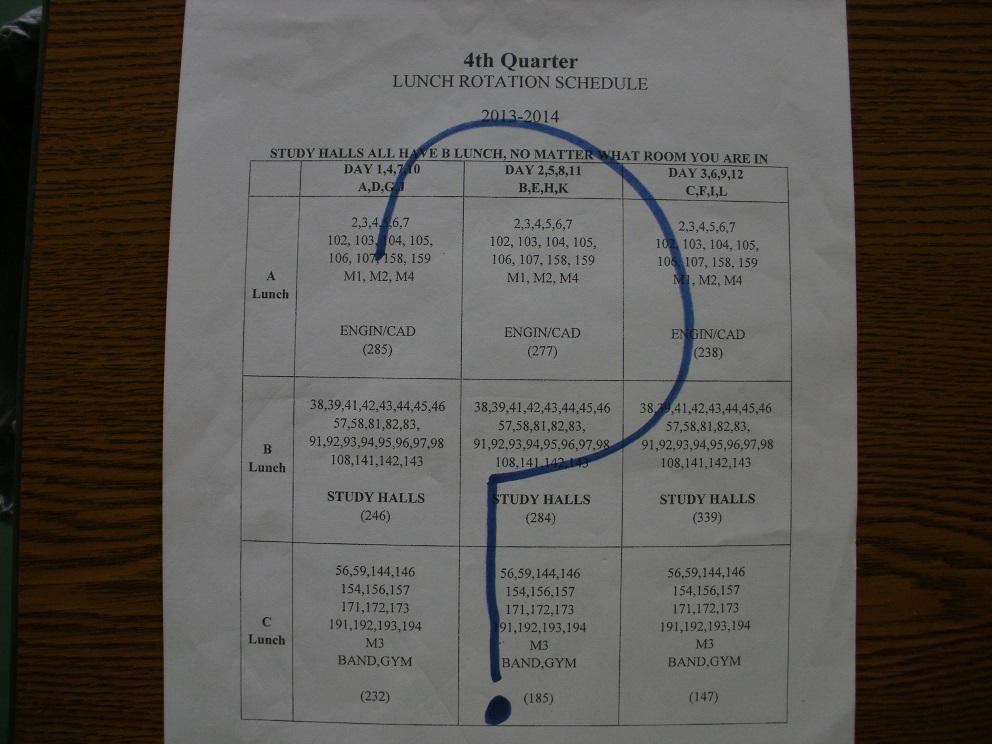 The first month of freshmen year is spent in utter confusion about the rotating schedule. “It moves?” and “I’ll never, ever remember this” are common complaints when the freshmen class first set eyes on their high school schedules.

However, by April they hardly have to look at their schedule–have actually probably lost it–because it has become second nature. But next year, this won’t be the case.

There have been talks to do away with the rotating schedule, to have the same classes at the same time each day. Indeed, this has been all but confirmed by PRHS Librarian Ms. Costello.

Costello says that this unwelcome change has been proposed in an effort to make things easier for students with internships and service learning–any class that takes them away from the school.

It is difficult, she says, for them to leave at a certain time each day because, with the rotating schedule they’ll often have to miss the same class.

However, removing the rotation from the whole schedule is unnecessary. Why not simply have the first five periods rotate? This would leave the last two stationary so people with internships and the like would be free to leave school without the fear of missing classes.

Students are attached to the rotating schedule, and would be angry that it is allegedly being taken away. However, they don’t even know about it yet. The information has not yet been released publicly–teachers don’t even know–but Ms. Costello does.

Despite student’s obvious aversion to change, there are actual concrete reasons as to why the rotation, even if it only was five periods a day rather than seven, is helpful.

Having class at the same time each day would become boring. The teacher who has students first period will always have them first period, and thus have to coax bed-headed, foggy-brained, and tired students every single day to get their work done. Similarly, the class directly after lunch will have tired students, content and apt to fall asleep after a meal.

The beauty of the rotation is that no one class is subjected to this fate more than twice a week. If, for instance, English is first one day and the class is not productive due to the earliness of the day, the class will be held second period the next day, after students have emerged from their brain fog and are able to be productive.

The possibility of having senior sign-in/sign-out would be slim at best with this alleged rotation-less schedule. On the off-chance that one has first or last period free, then they will have hit the jackpot, but everyone else will be left to glower in envy

Also, having the same lunch every day would mean that one has the same people in his or her lunch every single day. What if one was stuck in a friend-less lunch? Although some may pitch this as an opportunity to “make new friends” and “mingle,” this is more likely to happen than Pentucket’s technology actually working more often than once in a great while or without us having to fast for a day and pray for seven to even be able to watch a Youtube video in class.

But jokes aside, why do away with the rotation? We can compromise, keeping the last one or two periods stationary, but rotating the other five. This may seem confusing now, but hey, we all figured out the twelve day rotation schedule in no time flat. We can do this. Or, we should at least be given a choice in the matter rather than having it be announced on the last day of school as we’re walking out the door and there really is nothing to be done about it.

Well, we’re not done with school yet; let’s do something about this.

Mr. Seymour was unavailable for comment after five or more attempts.