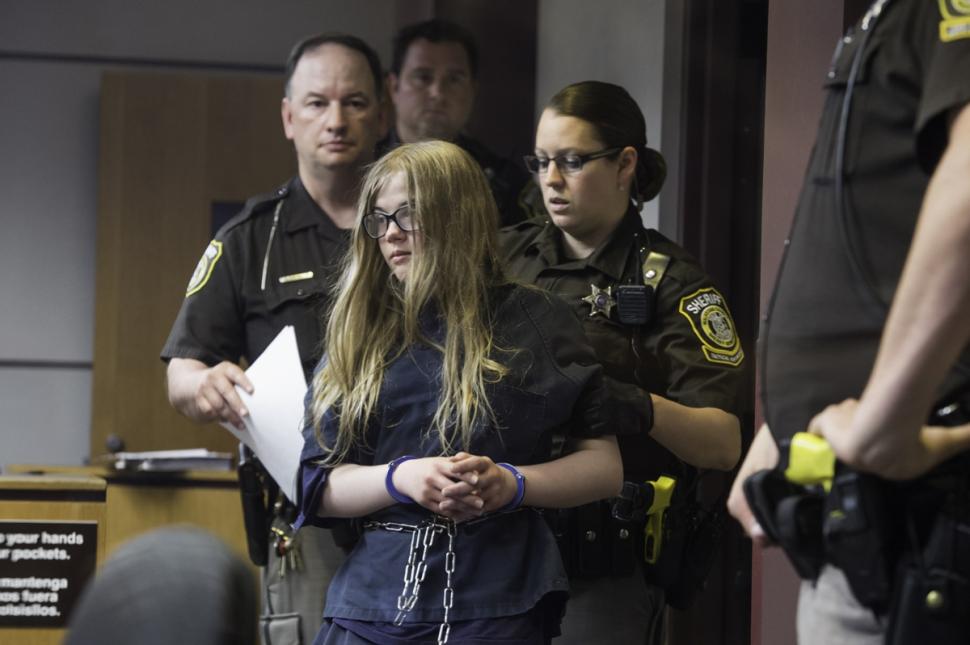 Saturday, May 31: Twelve year old girls, Morgan Geyser and Anissa Weier, of Waukesha, Wisconsin, led their friend into the woods where they repeatedly stabbed her nineteen times.

The question is: What caused these two young girls to commit such a disturbing crime?  The answer lies in a fictional character known as “Slender Man.”  They came across this name on a website known as Creepypasta Wiki.

Slender Man is a fictional character and internet sensation that often appears in horror stories, videos, and images.  One of the suspects told authorities that Slender Man is the website’s “leader” and that “to live under his realm, a user must kill someone.”

After the repeated stabbings, the two suspects left the victim to die, but she crawled to her own rescue; she was then discovered by a bicyclist who found her, barely alive, lying in the middle of a trail. The victim screamed, “Please help me, I have been stabbed.”

She was stabbed near her heart in a way that was described as “one millimeter away from certain death.”  The girl was in severe pain, and could barely talk; she could only answer yes and no questions.

After the victim was discovered, police searched for the other two girls and found them on interstate 94.  At that point, there was enough evidence to take the two suspects into custody.  Evidence included a large kitchen knife inside a purse that Geyser identified as her mother’s.  They are now being held on charges of attempted first-degree intentional homicide.

Geyser’s attorney, Anthony Cotton, told CNN that Morgan is being housed at a juvenile facility for females, and that her family is in “complete shock.”

Both suspects have not been given a mental evaluation yet, but will be given one within the next few days.

Waukesha Police chief stated, “Both suspects had a fascination with a fictitious character that often posted to websites dealing with stories about death and horror.”  This obsession led them to begin planning the attack, which they began in February.

The first thought was to kill the victim after duct taping her mouth while she was sleeping and stabbing her in the neck.   This then led them to their second idea which was to kill her in a park bathroom where there was a floor drain to make it easier to clean up the blood.  Lastly, they settled on carrying out the murder in the woods of a park, while playing a game of hide-and-seek.

Authorities described the attack:  “As they left for the park … (the victim) was walking in front of them and Geyser lifted up the left side of her white jacket and displayed the knife tucked in her waistband. Weier stated she gave Geyser a look with wide eyes and, when asked what that meant Weier stated, ‘I thought, dear god, this was really happening.’”

Geyser told officials, “it’s weird I didn’t feel any remorse.”  However, she did later identify the stabbing as ‘wrong.’

Due to the severity of the crime, the two suspects are being charged as adults, and appeared in court last Monday where their bail was set for $500,000.  If convicted, they could face up to 65 years in prison.  However, the suspects’ lawyers are pushing for them to be tried as juveniles, in which case, they would only serve time up until they are 25 years old.