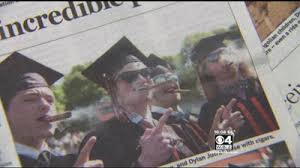 Let’s face it, celebratory cigar smoking at high school graduations goes together like peanut butter and jelly.  It is a rite of passage, and marks the end of one journey and the beginning of another.  However, it does not appear to come without consequences.  Last week, two Beverly High School seniors were kicked off their lacrosse team and were unable to compete in the Massachusetts Division 2 Final game, for doing what a lot of seniors do on graduation day – smoke cigars.  The high school principal was notified of the incident on June 5th and the violation was confirmed by MIAA officials.  But should these two students by condemned for doing what has become a tradition at graduation?

Graduations do not come along every day.  In 2015 I will be at mine with a cap and gown, and yes you guessed it – a couple of cigars.