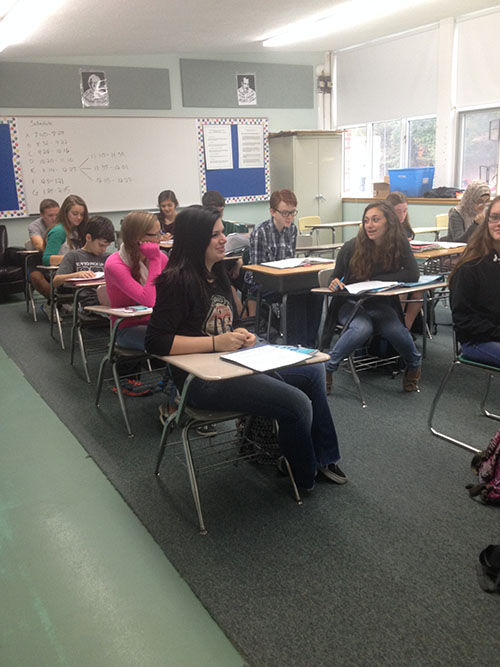 A place that can range from a scary prison to a social haven for the freshmen starting at Pentucket this year. Pentucket’s environment can affect freshmen students’ social lives, studies, and after school activities.

There are varying opinions from the freshmen about whether they like the middle or high school better. Hannah Dalton says, “I like the high school. There are more people to see in the halls, and it’s more grown up, I guess.”

Sports and after school activities can also be very different in high school than they were in middle school. Some of these differences include playing sports with upperclassmen, having double sessions, and practicing every day of the week. Some students think the switch to high school sports can be difficult, but freshman student, Connor Hileman says, “Upperclassmen really lead you in sports and show you the way.”

Usually, having electives in the high school is a great way for freshmen to experience more in depth art, music, computer, and gym classes than they had at the middle school. One student even said she never had art classes at the middle school. The high school brings a great amount of new opportunities and independence for students to express themselves. “In gym, kids basically control the game,” said freshman Connor Melone.

One big problem for new freshmen at the high school is getting lost on their first few days of school. This problem occurs every year because the high school is much bigger and more confusing than the middle school. Upperclassmen are always helpful to students who cannot find their classes, but they can be a bit intimidating to younger students. Most younger students find that they learn the general vicinity of where their classes are located after the first week of school. Freshman Caroline Cloutier says, “Once you get the hang of it, it gets a lot easier the second week of school.”

Making the jump from middle school to high school obviously leads to new situations and several changes between the different environments. All of the freshmen at Pentucket are beginning to get used to the changes that come along with the high school experience, but there are certain differences that seem to stick with them throughout the year. Current freshman student, Josh Devereaut says, “We are with a lot of older kids, and there’s a lot more freedom than we had in middle school.”

Getting used to the extensive homework load is a common difficulty for younger students because they do not usually have as much homework in middle school. Many freshmen stated that homework was their least favorite thing about the high school. Victoria Kelliher says, “We already had a couple of quizzes in history, biology, and foreign languages!”

Soon enough, the freshmen at Pentucket will realize the full potential of the school and all it has to offer.