The Change of a Homecoming Tradition 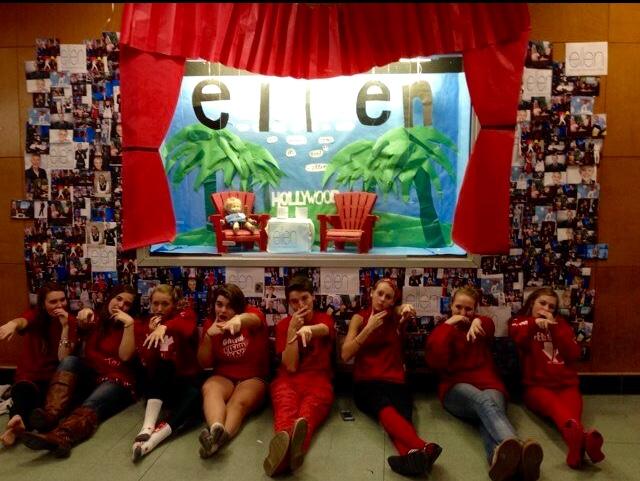 Spirit week: a week filled with pure pride and entertainment. Color Day and Spirit Week are one of Pentucket’s beloved homecoming traditions; unfortunately, 2013 shattered the underlying meaning of the word “tradition.”

Students piled into the high school auditorium that November morning last year, only to feel a weight on their shoulders. The excitement and anticipation of color day’s live skits gone, and in its wake, a sour sense of pride was left for the students and faculty as the new tradition of videos commenced.

Contrary to popular belief of Pentucket High staff, there was nothing but negative feedback for this new tradition. Pentucket Senior Maddie Lesiczka commented, “The videos were a waste of my time.” Various other students had similar reactions to Lesiczka, all commenting that it was less fun, boring, or stupid.

Even with all the negativity floating around Color Day, no one truly understands why it was necessary to take away one of the most exhilarating forms of school spirit Pentucket has to offer. Senior Zack Dresser stated concern about the misjudgments of Pentucket faculty, “Teachers should not decide whether we do skits or not since it is a day for the students. Teachers should not cap the expression of our school spirit.”

The blame for this supposed suppression of spirit naturally falls on the man in power; Pentucket High principal Jonathan Seymour. However, despite biased views, Seymour has not solely changed Color Day for the purpose of punishing the student population. He personally thinks, “Color Day/Spirt Week is a lot of fun. Color Day is a great tradition.” But the question still remains as to why this so called “great tradition” was morphed into something totally different.

According to Principal Seymour, “it wasn’t necessarily me that changed [color day.] We work really closely with all the class advisors, and our whole goal is to keep Color Day to be fun, but sometimes it gets to be inappropriate. So it’s hard to have something that’s like this big event for the whole school that just sort of boils down to inappropriate, sexual innuendos.”

With that said, these “sexual innuendos” Principal Seymour talks about, still leave the student population troubled. The current rumors suggest that only one grade, which happened to be the class of 2014, were the only ones using Color Day as an unmonitored day of play. However, what students don’t know is the horror displayed on stage in earlier years.

2007 was remembered by a variety of teachers as one of the most horrific Color Days to date. According to Mrs. Ducolon, the senior skit tore the principal, Mrs. Townes, apart. They wrote a parody of all the things Mrs. Townes did, but in way that completely shed her in a light of senselessness.

Pentucket teacher and history department head Mr. Stevens was one of the few teachers who saw the skit in 2007, and he spoke up about the fact that he personally likes the videos better, but was a little disappointed in the spirit of last year’s Color Day. Stevens states, “There was a high tension in the building, but I do also kind of recognize that the spirit was kind of flat in terms of the response.”

Even if teachers like Stevens like the videos, they can even recognize that students are having a hard time getting into them. Popular opinion points to the logic students are currently experiencing the, “We didn’t do anything wrong” attitude.

Pentucket Senior Hannah Zaneski stated, “Even though they took the skits away, I feel like it was only that one grade [who was inappropriate]. No other grade did anything.”

Unfortunately, the fear of an inappropriate presentation still worries the high school’s staff. Even if it was that one grade who decided to go off script and display a work the school cannot be proud of, videos can “give [the faculty] the ability to know exactly what is going to be presented in front of the whole school” Seymour Says. Thus began the tradition of a skitless color day.

With this year’s spirit week just weeks away, students are now concerned that videos will once again ruin the mood and atmosphere that should surround the school community. Fortunately, Seymour has admitted that he has “not yet given thought to this year’s Color Day,” shedding light on a new hope.

As students, it is important to step up, act responsibly, and request the tradition Pentucket knows and loves. Seymour has expressed optimism, stating, “Start by talking to your class advisors. It’s not just me. It’s all of us together trying to make sure we have a great Spirit Week.”

This new hopefulness could once and for all put the meaning back into the word tradition in the Pentucket community.