Athletes of the Week 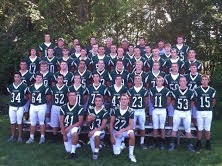 When asked to select one stand-out varsity football player, Mr. Hayden says he would choose, “The Team. Nobody does it by themselves. They all work together. I can’t pick just one individual.” He says every game or practice is a team effort. He claims that the team would not function without the work required from every player. This far into the season, the football team is 0-1, but they are striving to put that teamwork to good use in their next game.

Mr. Ruland chose Vivian Burke, a sophomore, as the stand-out player of the week for girls cross country. “She worked wicked hard last season and over the summer. As of right now, she is our best runner. She always stays positive and has a great attitude,” said Coach Ruland. He also mentions that people such as Vivian are becoming great leaders for the rest of the cross country team.

Krystal Knight has been chosen for player of week for Varsity Golf by her teammates. Cam Wolbach says, “She’s better than all of us. She’s just really consistent in how well she shoots.” As well as having great form and attitude, Krystal’s other teammates think she is a great leader. Krystal is ready to take this fall, golf season by surprise.

Mr. Langloyes thought senior soccer player Brendan Sullivan was the stand-out player for Boys varsity soccer this week. “He was just pretty much dominant at the right place at the right time, many times,” Langloyes says. Also, Sullivan has 2 assists, and scored 6 goals this far into the season. This experienced player will pave the way for a successful season for boys’ soccer.

So far, the Pentucket field hockey team is doing great this fall. Mrs. Beaton, the head coach, has nominated junior Emmy Maye Desjardins as the player of the week for field hockey. She described Desjardins as an, “unselfish player who is constantly seeking to lift up teammates, she is always positive and a good leader.” Mrs. Beaton also added that Emmy has played tirelessly at mid-field and is contributing well to the team.

As a senior captain and the number one runner for the boys cross country team for the past two years, Alex Demeule was chosen as the player of the week. Coach Cox said “He is one of the best captains I’ve had in 10 years here, he’s just a great kid and I believe he does very well in school also.” Alex qualified for all-states last season and is undefeated this season as well. Coach Cox praised his work ethic and the leadership he brings to the team.

Mckenna Kilian was chosen to be the stand out player of the week for Pentucket girls’ soccer by Coach Jesse Craddock. He said, “Mckenna has brought great leadership with her and a hard work ethic, she has the determination to put the ball in the back of the net which is what we need right now.” Craddock also added that Kilian is the points leader and the team’s leading scorer and just an all-around great attribute to the team.

For the stand out player of the week in cheerleading, June Reid was chosen by Coach McGowan was described as “a great positive person with a great team first attitude.” Reid is new to the cheer team this year and has made a great impact on the team so far this year, Coach McGowan also added that Reid has a great work ethic to become a better teammate so far this season.