Turn Down for Sadie Hawkins 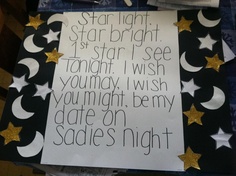 How creative can you get to ask somebody to the Sadie Hawkins Dance? Is a flying airplane with a sign along the back too much?

According to Brooke Chambers, the craziest way to ask a guy to Sadie Hawkins is to, “sit on the beach with a message behind the airplane. The plane would fly over right at sunset when the sign can be perfectly seen.”

Nicolette Kent’s idea of asking someone to Sadie Hawkins also involves a flying object. “I would spell Sadie Hawkins out in roses on a field and fly a plane over the field so that he could look down and see the message.”

If Junior Tori Soucy could ask someone to Sadie Hawkins, she would, “have someone mow a big S and H into a grass field and take the person I am asking over the field in a huge hot air balloon. Once the hot air balloon got high enough, I would have them look down to see the big SH mowed into the grass.”

Some girls would ask a boy to the Sadie Hawkins Dance in a very bizarre and unrealistic way.

Maria Desisto said, “I would change the big McDonalds ‘M’ to a ‘SH’. And underneath the yellow SH, the sign would say, ‘Will you go to Sadie with me?’ Then, I would buy him something off of the dollar menu.”

If Spanish teacher Senorita Cavallaro were in high school, she would ask someone to the Sadie Hawkins dance by putting a ‘SH’ on the bathroom stall door in toilet paper. “It’s definitely crazy, really funny, and unexpected.” Agreeing with Senorita, no boy would expect to be asked to a dance with toilet paper.

Is this how boys would want to be asked?

Math teacher Mr. Angelli, also being creative, said, “I would want the girl to set up a scavenger hunt with a bunch of clues, and the last clue would lead to her asking me to the dance.”

Unlike Ryan Depaolo and Mr. Angelli, Senior Ian Davis does not know exactly how he would want to be asked, but he does know that fireworks would need to be involved. “Maybe the fireworks could all explode into a big ‘SH.’”

History teacher Mr. Harty would not want to be asked in a big way. “I don’t like a lot of attention. I would just want a simple love letter to show her affection.”

If you could ask anybody to Sadie Hawkins, how would you ask them?