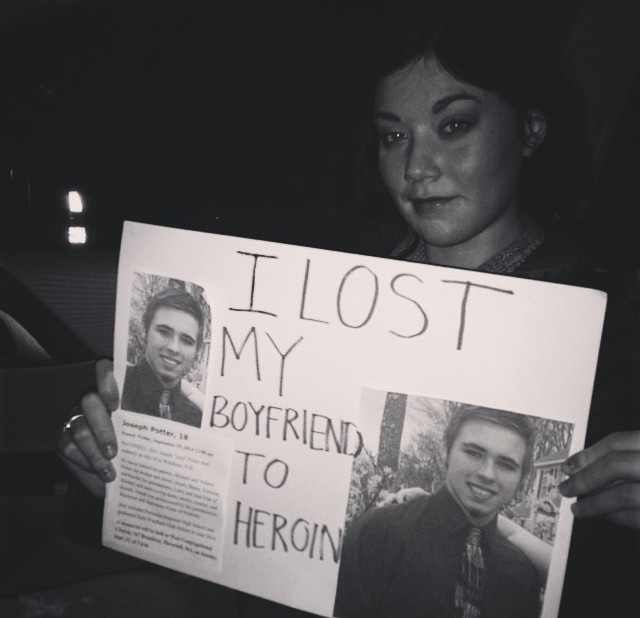 Sunday December, 7. 2014 I took part in Candle-light protest through the streets of Haverhill, MA to show my support to the people who have been lost, and people who are suffering from the recent heroin-epidemic.  Everyone was told to bring pictures and posters of people they had lost of signs titled “No More!”

Most people know that I personally suffered a loss from heroin, my long-time boyfriend, Joey Potter.  My poster had pictures of him, his memoir from his funeral, and the words “I lost my boyfriend to heroin.”

It was absolutely touching to see two hundred others who supported the cause, some who had also suffered losses due to the deadly drug.

The walk began at city hall and continued to the Salvation Army church.  Throughout the entire walk people were crying, screaming, and saying “no more.”  When we continued on to some of the more rougher areas in Haverhill, the crowd got even louder to make it known we will no longer accept heroin as a “norm,” or wake up each day, to a new death.

Once we reached the Salvation Army Church, all two hundred of as were seated to hear a speech from a priest from Haverhill, the town mayor, and school officials.  People from the crowd were also invited to stand up and tell their stories.  I was going to get up and share my story, and my own struggles with drugs, but the loss of Joey is still so fresh, I knew I would have lost it.

Three people stood up, a young man who lost his brother to heroin, a recovered addict who also works with former NBA star, Chris Herren, and also a former drug dealer who spent 16 years in prison.  Each of their stories touched my heart and got me thinking about my own struggles and my own losses I am trying to overcome.

It makes me happy to see that other people care as much as I do about this devastating epidemic.  I can only hope that addicts will stand up and try to get help.  I will continue to voice my opinion and struggles on the devastation this drug causes and take a stand.

I will say, “no more” to heroin and help others who are struggling.