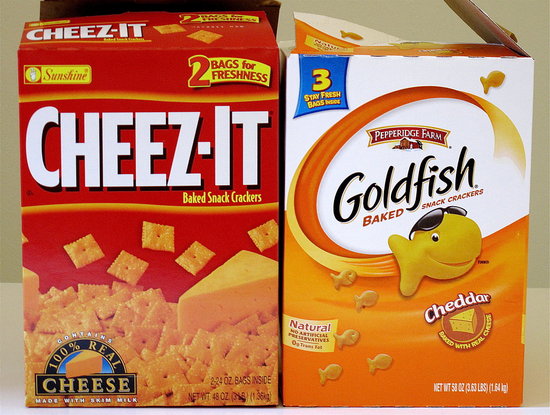 Goldfish, otherwise known as “the snack that smiles back,” is a classic cracker that everyone loves…Or do they? Similar to Goldfish, Cheez-Its remain popular with students today.

Many people said they enjoyed Goldfish more than Cheez-Its. Could it possibly be because of the smiley fish face? Zach Colbert says, “The snack that smiles back. I only eat happy looking cheese products.” Are Cheez-Its less popular because of this difference?

Other Goldfish lovers believe that Goldfish are more popular because of the amount of cheese in them. “More cheese is more love,” claimed an anonymous senior.

Different people around school believe the opposite; that Cheez-Its are dominant to Goldfish. Apparently there are various opinions on why Goldfish are worse. Is it because they are childish? Are they too small?

Tony Dalton explained, “Goldfish are for 2nd graders during snack time, and Cheez-Its are a grownups classiest, middle class snack.”

Other factors that keep people from eating either of these snacks are the flavoring. Both Cheez-Its and Goldfish have different flavors such as flavor blasted, parmesan, baby, pretzel, white cheddar, and pepper jack.

For some people, this choice of flavor can decide whether or not they eat this type of cracker. For example, Maddie Torrisi said, “I only like Goldfish when they are the pretzel kind.”

Others assumed they could have their own pick of flavoring. “Assuming it is my choice, I would go for flavor blasted,” said Mike Masterson.

Aside from all of this debate, some people liked both Cheez-Its and Goldfish equally. Ashley Magee stated, “I like both. Anything with cheese is dope.”

Contradicting that statement, the last few people could not choose between either of the snacks, either because there was not enough information or they did not like the taste of both. Ian Davis says, “This is not detailed enough! What flavors are we even talking about?! Parmesan? Cheddar? Original? Jeepers.”

Overall, out of a poll of 58 people, 40% chose Cheez-Its, 57% chose Goldfish, and 3% were undecided. From this poll, it is evident that Goldfish were the popular vote coming in with a little more than half the votes. Cheez-Its trailing a little bit behind were not as popular.

Goldfish can now be considered the most popular cheese snack in Pentucket, but other Cheez-It lovers will continue to persuade people to love their favorite snack more.