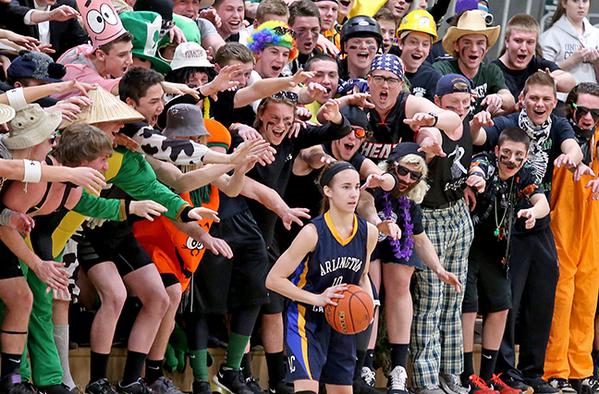 Pentucket fans packed the Saint John’s Prep gym to cheer on for their girls’ basketball team who were playing in the MIAA D2 North Semifinals against the Arlington Catholic Cougars. The Pentucket girls were able to beat Arlington Catholic 34-25 after four quarters of a fast paced nail-biting battle. In the first quarter, Pentucket fell behind 11-4 until Kelsi McNamara scored two baskets ending the quarter 11-8. In the second quarter, sophomore Colleen Jameson sunk a three tying the game up. The only other points that would be scored that quarter were from two free throws from Kelsi McNamara who gave Pentucket the lead 13-11. The Sachems shut down the Cougars defensively stopping them on every drive. In the third quarter, Colleen Jameson went on a streak scoring four three pointers adding to Pentucket’s lead making it 11. Going into the fourth, Pentucket led 29-16. After dominating most of the quarter defensively, with 5 minutes remaining, the Cougars began to get in a scoring rhythm. After many questionable calls against Pentucket, the Cougars were able to diminish the lead to only 29-25 with a little over two more minutes left to play. With 2:19 left on the clock, Kelsi McNamara came back into the game scoring five points to give Pentucket the game winning lead of 34-25. Kelsi McNamara finished the game with 15 points, making her the all-time leading scorer in Pentucket history beating Ashley Viselli’s record of 1,230. She now holds the record for 1,235 points. Pentucket sophomore Colleen Jameson finished the game with 15 points as well. The Pentucket girls will go on to play in the Tsongas arena in the MIAA D2 North Finals on Saturday.