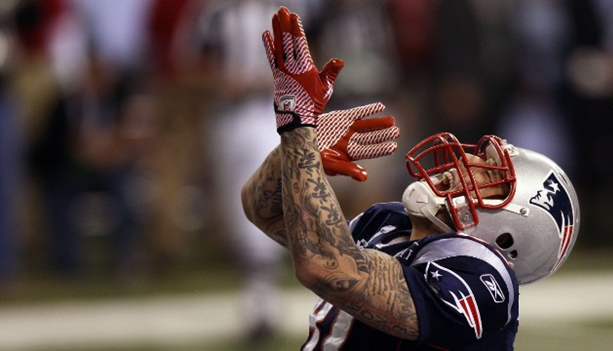 When the 2010 NFL season began, Aaron Hernandez was the youngest player in the league. Hernandez immediately proved he could thrive at the game’s top level. He set the Patriot’s rookie record for 45 catches as a tight end.  Hernandez helped the Patriots notch an impressive 14-2 record and make a trip in the playoffs to the AFC Championship.

The following year, Hernandez teamed up with fellow tight end and 2010 draft pick Rob Gronkowski to spearhead an unstoppable New England offense. The duo combined for 24 touchdowns and 2,237 regular-season receiving yards dominating the league before a tough loss in Super Bowl XLVI to the New York Giants.

Currently, former NFL tight end Aaron Hernandez is facing a civil lawsuit for shooting and injuring Alexander S. Bradley. He is also facing charges for connections to the murder of Odin Lloyd and a double homicide in Boston. The charges as of now are pending, but most likely Aaron Hernandez will be convicted with a large amount of evidence going against him.

However, what if he were innocent? What if all the charges were dropped and Aaron Hernandez was a free man? Would Aaron Hernandez play in the National Football League again, despite all the allegations and distractions?

Pentucket Hall of Fame Football coach Steve Hayden believes, “If it truly wasn’t Aaron Hernandez who pulled the trigger, then you’d have to play him, but he seems very suspicious with 3 murder cases going against him.” Despite Aaron Hernandez’s undeniable athletic ability, Hayden said that he would not want him on his team.

Pentucket Athletic director and Assistant Principal Dan Thornton thinks that Aaron would play in the NFL again. However, he expressed his concern that Hernandez would be incredibly out of shape by the time he is let out. “With the elite competition of the NFL, you need a lot of exercise, and Hernandez is being held in solitary confinement with not much to do, so by the time he’s let out, I don’t think he’d be physically as good as he was before.” Thornton went on to say, “It would be amazing if he was innocent, but he would play.”

Pentucket History teacher Michael Stevens believes that if he was innocent, then he deserves a second chance. “Someone would say, in our society, if courts would say you’re innocent you deserve a second chance.” Mr. Stevens also said that he thinks that a desperate team, such as the Jacksonville Jaguars who went 2-14 last season, would pick him up out of desperation.

If Aaron Hernandez is innocent, he would probably be able to play in the NFL again. However, with an incredulous amount of evidence going against him, it’s safe to say that Aaron Hernandez is never going to play organized football again, never mind the NFL.