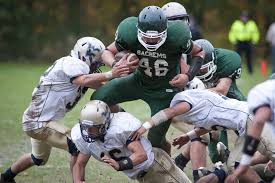 Are high school sports better than middle school sports? How difficult is the transition in the sense of a higher level of competition? Are having more options and teams too overwhelming for young freshman to handle?

According to Erin Mixon, a freshman, “it just kinda feels like too much sometimes. Like one day off would be good.” Though she finds it to be “too much”, she enjoys the variety of sports options at the high school, compared to the weak variety of sports at the middle school. Playing high school sports has helped Erin to get to know upperclassmen, which has helped her transition from middle school to high school. Overall, she claims that her favorite part of high school sports is “meeting people I usually wouldn’t hangout with.”

But, is this how every freshman feels about the sports here at Pentucket? Well, according to

Mackenzie Salt, a freshman who currently plays soccer, she has not found high school sports to be helpful in meeting upperclassmen because she is on the freshman soccer team. But, one thing she could elaborate on that Erin Mixon also mentioned, is the idea that having practices and games after school every day can get to be too much. Mackenzie found this to be an issue “because when you have a lot of homework it’s hard to fit it all in.” Even though she finds high school sports to be a lot on top of all the homework, she still really enjoys “doing sports more than once a week.”

Well, one freshman, Jack Galligan, who plays football, has an answer to that. He does not find having more games and practices to be overwhelming at all, he claims it to be “just the same.” Though Jack has a different opinion than the girls on the idea of more practices and games an athlete has a week, he did agree with them in the sense that the transition is not very difficult.