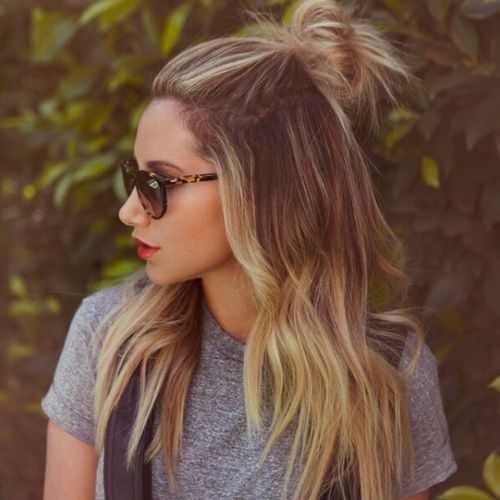 In the wake of the “man-bun” craze flooding pop culture and social media, the latest trend of 2015 seems to be the “half-bun” hair style.  Girls all over Pentucket are crazy about the new and simple fad.

A new twist on the classic “half-up half-down” hairstyle common amongst middle schoolers and soccer moms alike, the half-bun provides a hip alternative for teen girls.

“You do a ponytail and you’ve got creases,” said Junior Lily Griffin.  “You do a bun and it just looks messy.”  To solve this daily dilemma, Griffin turns to the iconic half-bun.  “When you want some hair down so you look like you’ve tried, but you want to keep your hair out of your face, that’s where the half-bun comes in,” she said.

Sophomore Emily McFarland agrees with Griffin that the half-bun “is easy but looks good.”  She adds, “I call it my ‘Messy, I Don’t Care’ look.  It’s my go-to hairstyle.”

Since so many students at Pentucket are joining the “half-bun” craze, many are wondering where the trend began.

McFarland credits Pinterest for her inspiration.  “I was looking at new hairstyles and I saw [the half-bun] and I was like ‘woah.’”

More uniquely, Griffin was inspired by her step-sister who “had to cut her hair because it was all knotted so she had to wear [the half-bun] or else she’d look dumb… she’s eleven.”

However, not everyone is loving this new half-bun trend.  “It looks dumb and gross.  I hate it,” said Senior Molly Hogan.  “I think everyone should stop [wearing it].”

Senior Kenny Nivan, providing a male perspective, agrees with Hogan.  “No.  Just don’t even do it,” he said.

“I respect people for trying something new,” adds Senior Ethan Bridgewater.  But like Hogan and Nivan, he is not a fan of the new hairstyle.

Providing a less opinionated perspective, Senior Maddy Corkery believes the half-bun can only truly be accomplished by certain individuals.  “You’ve gotta have really fluffy hair to pull it off,” she said.

Despite the controversy about the new hairstyle, students at Pentucket are sure to see some version of the half-bun when wandering the halls.