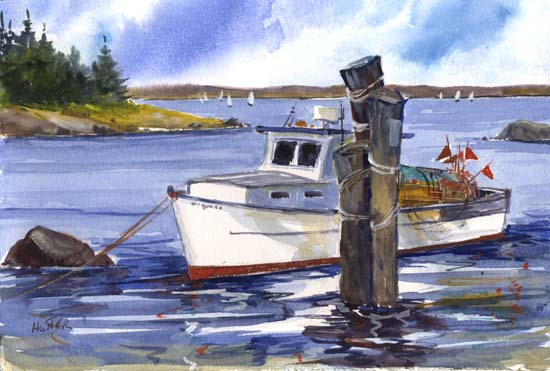 It was 4:45am when he arrived.  Clad in black rubber boots, he squeaked down the dew covered dock disrupting the placidity of dawn.  Before any bird crowed or sunshine appeared, he heaved bags of bait into the stern of is twenty-five foot sport fishing boat.  His pumpkin colored rain coat overwhelmed his body as he went to work chumming.  With rhythmic beats, his muscular calloused hands brought the knife slamming into the cutting board.  Fish guts spewed over the starboard ledge kerplunking into the river.  A small burgundy cloud formed around the boat.  After scraping off the last bits of crushed bone, martyred flesh, and dried blood, he spat into the water.  For a brief second, he stopped.  I feared he saw me watching him and cowered behind the sail of a neighboring Hunter.

He stood on the creaking boards of his beloved ship’s deck.  Notches in the deep mahogany wood told stories of battles with finned monsters; dark stains revealed conquests of scaled beasts; a slab of Duct tape covered a hole of desperation.  I watched as his blue eyes shifted from each of these imperfections to the next.  In the silence of the morning that was still very much night, he stood and breathed deeply, the sweet aroma of rotting fish filling his flared nostrils.  The salt, so poignant in the air, touched his chapped lips which he licked in content satisfaction.  Overhead, a herring flew across a purple backdrop, diverting the man’s attention.  The cawing of a nearby seagull brought him out of his trance, signaling it was time to get underway.
The old man began the engine which stuttered and erupted into a thunderous explosion.

A cloud of gray smoke danced in the breeze, casting a shadow upon a world that was just awakening with the first touches of sunshine.  The man brought his large fists banging on the engine, more out of desperation than of anger.  As sweat streamed down the man’s hard wrinkled face, I shivered.  He banged and banged the engine until finally, it sputtered a few times, splashing water in every direction, and eventually emitted a healthy hum.  I thought I saw a smile creep upon the old man’s face as he tore off his jacket to reveal circles of sweat beneath his arms.  At the helm, he put the engine in neutral, and leaned over the side of the boat to untie the lines.  Boating etiquette summoned me to help him tie off, but I didn’t risk making my presence known.

Rather than neatly tying up the slick, salt-crusted and sun-bleached lines as my father taught me, the man threw them, along with the fenders, haphazardly into the stern.  Suddenly, he was off, sailing directly into the golden ball of morning.

This time, I knew I saw him smile.  But, his face stayed permanently etched, his lips remaining in a straight line.  Although his jaw never moved, he gave a smile as bright as I have ever seen on a child receiving their favorite candy.  It was his eyes that gave it away.  Beneath the tattered, ripped, worn, and blood-stained fishermen’s hat, his eyes peered out, sparkling like the sun-kissed peaks of each wave of  the mid-morning tide.  Beneath furrowed brows and leathered, wind-slapped skin, he smiled.  I ran to the edge of the dock, so far away from home as this man traveled closer and closer to his.  I waited until the faded letters on the stern, lovingly spelling out Carol Anne, were no longer visible and all that remained was a stream of oil and the foggy remnants of gasoline polluting the fresh, early morning air.