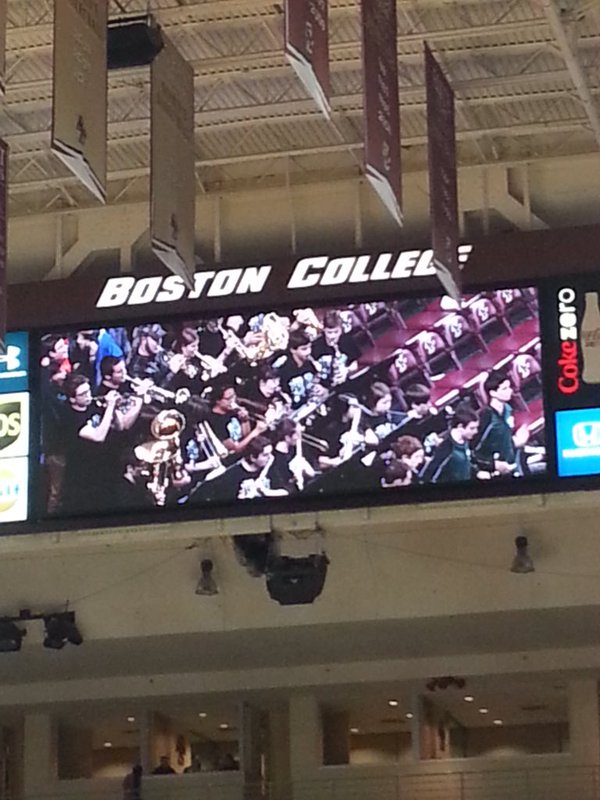 Since it was planned last minute and they were expected to return late, students were given the option of attending. The band met at the band room at exactly 4:45 and left promptly at five. The band was supposed to play pregame music but because of traffic they arrived too late and had to rush to get to the game on time.

Boston College had said there would be chairs for the tired band to sit in, but once they arrived, there were no seats and the band had to stand for the entire game. The band was also promised pizza, but the people at Boston College forgot and the ravenous band was taunted and teased by every smell of food lingering in the forum. Most students had come straight from sports to make the trip to B. C. and hadn’t eaten since lunch.  But they were a band united in their hunger, discomfort, and longing for home and still managed to play their music very well. Songs they performed included: Smoke on Water, Seven Nation Army, Pentucket Boy, and Final Countdown.

Finally, relief came for the band when the game was over. Unfortunately, B.C. lost terribly with the final score being approximately 80 to 50. In the end, the band did get their pizza when their hero Mr. B. brought it to the bus before they left. All in all, it was an interesting experience for all who came.

Despite the challenges, Pentucket remained strong. One band. One sound. One Family.