Is School Choice No Longer a Choice? 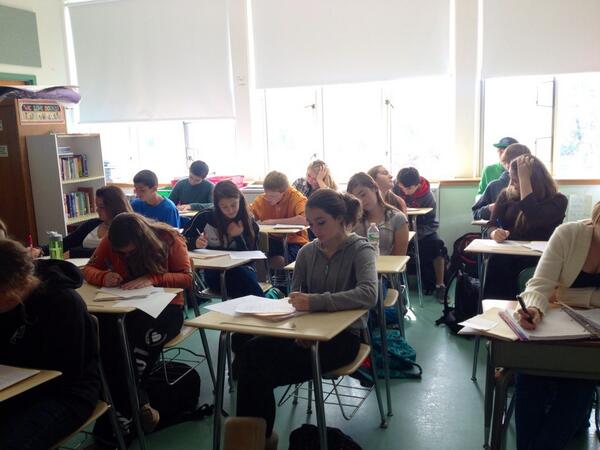 Students at Pentucket tend to blame the district as a whole for the poor quality of some of its resources, but could the real culprits of this budget crisis hail from outside of Pentucket’s borders?

Pentucket has long been the countywide school of choice, opening its doors not only to its towns of Groveland, Merrimac, and West Newbury, but also to students residing in surrounding towns such as Georgetown, Haverhill, and Newburyport.  These students, who seek a better education, must enter a lottery by filling out a simple application form that can be found on the district’s website.

The Pentucket school choice program gives students outside of the district the opportunity to achieve a better quality education.  However, the program is currently being reevaluated.

With close to 200 school choice students throughout the district, earning Pentucket almost $800,000, one might assume this extra money would be enough to at least pay for new books.  However, the money received from school choice is being used as part of the district’s $37,082,877 aid from the state, rather than being used for additional funds.

In an effort to gain more financial aid from the state and keep tax payers’ funds local, superintendent Jeffery Mulqueen believes the solution is to reduce about eight school choice positions each year.  “If we have schools people want to attend, people will want to move [to Pentucket] and therefore pay local taxes,” says Dr. Mulqueen who instead of relying on school choice funds, wishes to create a World Class education system.

However, this proposal is not sitting quite right with school choice students currently attending Pentucket such as Cammi Balentine, a sophomore from Haverhill.  Cammi attended Haverhill public elementary schools until she was accepted into the Dr. John C. Page School upon entering the fourth grade.

Cammi believes the large population in the Haverhill schools distracted her from her learning. “I was not fully prepared for fourth grade,” said Cammi.  Much of the teachers’ time had been spent controlling and disciplining large classrooms, making it difficult for her to receive individualized learning.

However, upon attending Pentucket, Cammi, along with many other choice students, such as Katelin McSherry, a sophomore from Bradford, have received the academic environment and skills they need to succeed that were formerly unavailable to them.

Katelin believes, “Pentucket has a much higher quality of education than Haverhill did.”  She also experienced a more comfortable environment at Pentucket when she was accepted as a school choice student for her Freshman year of high school, noting that the students and teachers create a welcoming community that makes for a “fantastic learning environment.”

“There was no involvement from parents [at Haverhill public schools],” says Traci.  Pentucket offered her and her family an environment where parents prioritized their children’s education and motivated students to do their best work and have consistent attendance.

Katelin relates, saying that her work is challenging, yet the teachers at Pentucket are always willing to provide assistance when needed.

Standing by Superintendent Mulqueen’s proposal however, is Michelle Hebert, a substitute teacher at Pentucket Regional High School and a 1985 graduate of Pentucket.

“We are at a $6,000 deficit,” says Hebert who believes if it cost the district towns so much money, it is simply “common sense” not to accept extra students from other schools.  With all the money saved, “We can utilize these funds for newer technology for our students,” says Hebert, who also believes the school is “deeply in need of repairs.”

However, instead of just refusing to accept school choice students, Michelle believes there should be stricter guidelines for entering Pentucket, similar to those of scholarship applications.  Such applications, could be “based upon academic records and community service,” offers Michelle.

Although the cost of the extra students is significant to the district’s budget, “My recommendation is not to eliminate school choice,” assures Dr. Mulqueen, who also guarantees that school choice students currently enrolled in Pentucket will continue to attend Pentucket until graduation.

“We are not anti-school choice,” says Dr. Mulqueen. “We are simply pro Pentucket.”

Although there is much dispute on this topic, ultimately, “If you want to learn, you will learn,” says Traci who believes the key to a good education is possessing the desire to explore and discover new things.