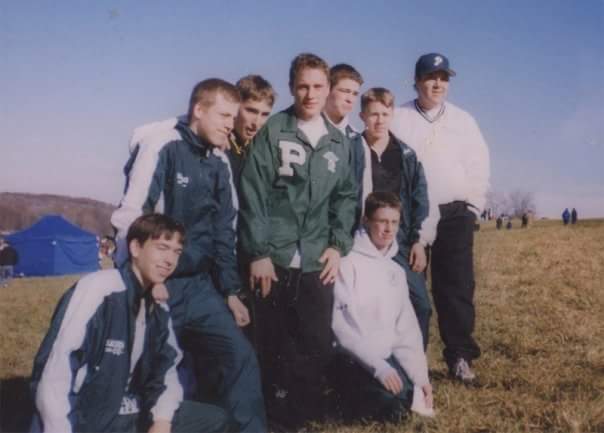 When was the last time you saw 40 boys in short-shorts?

Not at any football game.

Cross country, which could be dubbed the “neglected stepchild” of fall sports at Pentucket, has long been overlooked by the general high school population.

One might ask, “What is there to care about?”

Cross country is simply not a spectator sport. Football and soccer appeal to the laziness in every American, as you can watch an entire game without standing up. However, cross country requires the spectator to be an athlete in himself, running from point to point, just to catch a brief glimpse of the action.

When asked whether or not cross country is overlooked at Pentucket, Emily Stys responded with an insightful “yes” and did not elaborate any further. This seems to summarize the sad truth in one concise statement.

Video Production teacher and underground hero Mr. Bart recalled his time spent with the team: “ I was recently conversing with an old friend, and we were reminiscing about our time with the team. When I was a senior, we came in second place at our state divisional meet, and came home with the trophy they give you. No one really seemed to care too much, I guess all of the attention went to the football team.

A very sad truth indeed, as this year’s cross country team didn’t receive so much as an announcement when they qualified for the Massachusetts All-State Meet. The team hadn’t been granted such a feat in twelve years.

Will Coppola, a freshman who runs cross country, shared the dismay he felt for this event: “When the team made All-States, we didn’t even get an announcement. I was heartbroken.”

Coppola also went into depth on his feelings towards the inequality revolving around cross country: “Football is a more common sport. I still don’t understand the appeal. I would much rather go watch a professional track meet than a football game.”

In an interview with real, live football player Brandon WIlbur, one can (almost) understand the thinking behind the elitist coup that is Pentucket Football: “I don’t feel cross country is overlooked at all. If anything, it’s appreciated too much, and football is overlooked. Not a lot of people actually show up to football games, even though they should, because football is a beautiful sport.”

Andy Murphy, a fifty-three year-old School Committee member from West Newbury, talked about his experience with the cross country team at his former high school in New Canaan, Connecticut: “[The cross country team] wasn’t the best, but they were one of the top three or four teams in the county. The football team was terrible at my high school, but even then, Cross Country never got the same attention as football or soccer.”

Soccer. Another one of cross country’s more successful brethren.

The only way to catch a glimpse inside of the mind of one of the scalawags who engages in such a sport is to talk to one, which is exactly what Pentucket News set out to do. Matt Maloney feels that: “[…] people just think it’s running, and that it’s not much of a team sport, or that it doesn’t take much skill.”

Noah Elias-Guy, a Sophomore, shared his anguish: “Cross country is the often overlooked younger brother of the sports scene at Pentucket. Too many times have I been to a cross country meet and thought ‘What potential wonder and magnificence could occur here if it weren’t for the sheer lack of enthusiasm towards this sector of the sports department?’”

Unfortunately, there appears to be a limited amount of awareness surrounding this issue. It would seem that, if the situation regarding cross country inequality were to improve, it may not be for years to come. As the awareness of concussions in football broadens, cross country might someday become the glory sport we all wish it were. People will flock for miles around to watch Pentucket runners cross the finish line, and vanquish athletes from the surrounding schools.
Could this some day become a reality? One can only wait, hope, and pray.