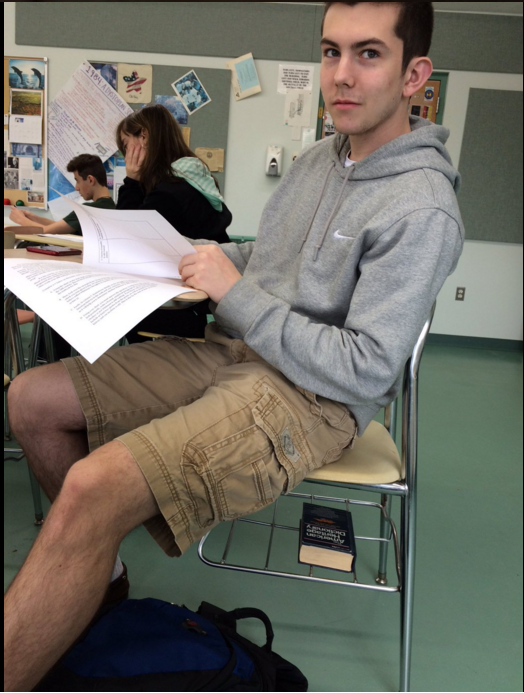 Can one sacrifice style for storage?

That is the question being asked now that spring is coming here at Pentucket.

Cargo shorts are being worn by many males at this school and it seems as if none of them are bothered by their major fashion faux pas.

Cargo shorts are defined as, “Loose-fitting casual trousers with large flap pockets on the thighs.” This type of trouser is mainly worn by people who need to carry many things in their pockets because their situation requires them to. Tourists and hikers are major cargo short wearers due to the necessity to be able to hold things while on the go.

It is also common for older men to wear cargo shorts because of the convenience of the pockets. Erin Mikson stated, “My dad wears cargo shorts.”

Tourists, hikers and dads are not necessarily the most cutting edge fashion icons, but they do seem clever to be using the cargo shorts for their real purpose.

In the case of Pentucket males, it seems many of them do not use the pockets at all. Why then, do so many of them wear such a visual travesty as cargo shorts?

Bobby Bigham, an avid cargo short wearer, claims that he has never met anyone who did not like his cargo shorts. He says, “I think they are fine, just another pair of shorts.” Bobby, like many other males of Pentucket’s population, seems to believe that style is not very important to his day to day life.

Another proponent to the cargo epidemic, Mrs Villani, says that “They are classic!” She seems to think that cargo shorts are very in style and should be worn for years and years to come.

Jon Parsons, junior and Pentucket’s male fashion icon says, “Cargo shorts have not been in since like 2008.” Seems like a pretty unpopular opinion among his fellow male peers.

Although it seems as if very few males care about their appearance, there are also some fashion savvy boys at Pentucket who know a thing or two about proper short wear. When asked if he believes the shorts with the pockets are in style, Sophomore Matt Maloney said, “No, personally I prefer the slick, no pocket look. Wearing cargo shorts makes you look like you lost the bottom half of your army pants.”

The cargo short outbreak does not seem to be going away anytime soon and those with shreds of fashion sense will have to respect those who enjoy having the extra pockets.