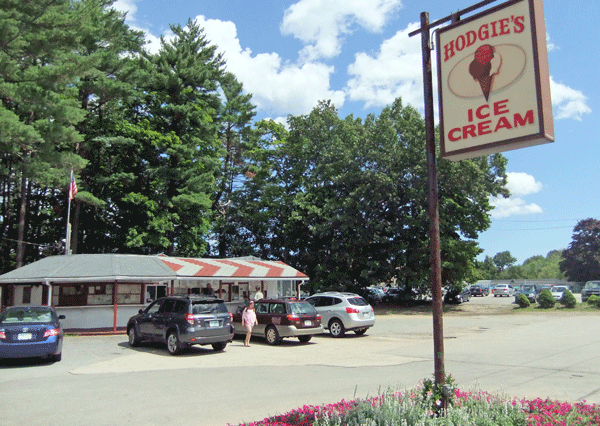 The warm weather has started to arrive, and the countdown to summer has begun. It’s almost time for everyone’s favorite dessert on those sweltering hot days: ice cream. Luckily, we live in an area that is not lacking in first-rate ice cream. The only problem is deciding where to go to find the best cone, cup, or frappe.

Chances are, if you go to Pentucket, you have been to one of the three major ice cream stands in the surrounding towns: Carter’s, Scoops, or Hodgies. Depending on where you live, you will probably find yourself visiting one of these three ice cream stands this summer, maybe more often than you might want to admit.

Carter’s, located in Bradford, is a local favorite for many families that live in Groveland, as it is not only conveniently located, but delicious. Known to give extremely generous portions, Hodgies in Amesbury is favored by many Merrimac residents. Those who live in West Newbury often choose to indulge their sweet tooth by visiting Scoops, located just down the road from Old Towne Hall.

Hayley Palermo, who lives in Merrimac, says that she prefers Hodgies for both its convenience and the taste. She praises the creaminess of their ice cream as well as the portion size. “If I’m feeling like I want ice cream really bad, that’s the place to go,” she says.

Sophie Webster agrees. A resident of Groveland, she admits that it’s a longer trip to get her favorite ice cream, but she says that the “trek over there is definitely worth it, especially after sports games or practices.” She also says that Hodgies is one of the only ice cream places around that serves soft serve ice cream, which makes her decision of where to go a lot easier.

“I like Carters, but sometimes I go to Scoops just because it’s close,” says Liza Russell, who lives in West Newbury. She praises the creamy texture of Carter’s ice cream and likes that it is homemade.

Melina Demokritou, who lives in Bradford, says that she prefers Carter’s as well. “I like it because it’s within walking distance and I love the homemade taste,” she says.

Demokritou likes classic flavors such as chocolate or coffee, but also the unique ice creams that Carter’s offers, including one of her personal favorites, Purple Cow. “It doesn’t taste like any other ice cream I’ve ever tasted,” she says.

It seems as though Carter’s and Hodgies both have their benefits and downfalls, but are both equally delicious. However, Scoops seems to be lacking the draw that both Hodgies and Carter’s possess, whether it be portion size or pure taste, even if it is convenient to those who live near the school. In conclusion, when you want an ice cream this summer, visit Hodgies or Carter’s!