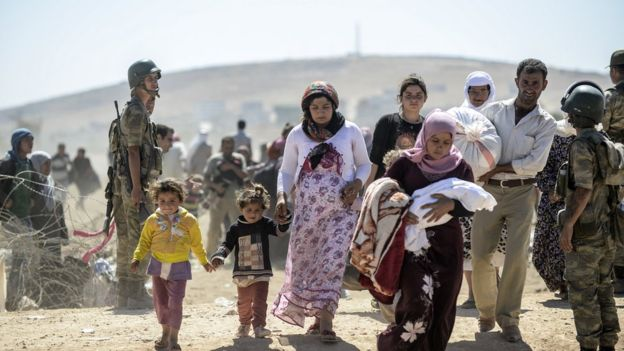 For the past twenty years, the United States has made a mission of involving itself in the troubles of the Middle East and leaving it in worse condition every time its soldiers leave. After the Gulf War, the United States abandoned the Kurds, leaving them at Saddam Hussein’s mercy. The first Bush administration also left a blockade in place in Iraq for a decade after they left, increasing the economic distress the region was in.

Then, after 9/11, the United States launched an invasion of both Iraq and Afghanistan. This war cost 4,500 American lives and killed hundreds of thousands of Iraqi soldiers and civilians, in addition to displacing millions of people. After the government that the United States installed collapsed, Iraq was left in utter ruin. How does this affect the Syrian refugees?

Out of the ashes of this chaotic war arose the Daesh, more commonly referred to as ISIS. They burn children in cages, cut off the heads of reporters,  and currently have the world’s largest volunteer army. They’re taking land as rapidly as Hitler rose to power in Germany.

They are currently invading Iraq, Syria, Saudi Arabia, Afghanistan, Egypt, and most recently Libya and have agents in France, England, Belgium, Germany, Sweden, and the U.S.  The group, combined with American and Russian bombs, has displaced millions of people: women, children, and men alike.  Despite these acts of terror, almost every nation in Europe is taking them in with open arms, even though they cannot afford it.

The United States, who economically could afford to support Syrian refugees, is debating whether or not to let them in because of the possibility that they could be terrorists. Although according to the New York Times almost all of the mass shootings the U.S has per year are caused by mentally unstable or radically inclined whites, Muslims are the main concern.  The main argument that has been given against letting in Muslims is “If you had a bag of 100 peanuts, and you knew one was poison, would you give that bag to your child?” First of all, these are people not peanuts. second, the process in which these “peanut people” are vetted is insane.

First, a refugee must apply through the United Nations High Commission of Refugees, which collects documents and performs interviews. Incidentally, less than 1 percent of refugees worldwide end up being recommended for resettlement, but if the refugee is one of these few, he or she may then be referred to the State Department to begin the vetting process. At this point, more information is collected, and he or she will be put through security screenings by the National Counterterrorism Center, the FBI, and the Department of Homeland Security. If this individual is a Syrian refugee, he or she will get an additional layer of screening called the Syrian Enhanced Review, which may include a further check by a special part of Homeland Security—the USCIS [United States Citizenship and Immigration Services] fraud detection and national security directorate.

Don’t relax yet, because this is just the beginning.Then, refugees  finally get an interview with USCIS officers and are also fingerprinted so their prints can be run through the biometric databases of the FBI, Department of Homeland Security, and the Department of Defense. If they make it through all that, they also have health screenings. If everything comes back clear, the refugee will be enrolled in cultural orientation classes—all the while, the information continues to be checked recurrently in terrorist databases to make sure that no new information comes in that wasn’t caught before.

This process takes anywhere from a year to 18 months. If a terrorist wanted to come into the U.S, it would take much less time for him or her to come in illegally. The United States has an obligation to let these people in, The United States  government and its people bear a responsibility for what has and what will happen in the Middle East, and they have to make things right.

An argument given by Donald Trump is “Why don’t they fight for their country?”

Their country is dead, bombs have turned their homes to ash, their mothers, fathers, brothers, sisters, and cousins are all being slaughtered by outside forces, and barrel bombs being dropped by their own dictator. How can they be expected to fight against multiple global superpowers when they can’t even see the faces of the men they’re supposed to be fighting? There is no point in fighting for a country that isn’t worth saving, and even if it could be saved, the U.S has sanctions on Syria that will have a long term effect on the Syrian economy.

Even though the United States has unquestionably played a serious role in the displacement of the Syrian’s, many Americans disagree with letting them in. “There’s too many people here” says senior Gabby Bilodeau. However, others, like Mrs. Costello, feel that we certainly should. She goes so far as to even say, “If I could I would take in a family.” Anthony Scibilia, also a senior, was 50/50: “I mean, if they are just trying to escape, we should help them, though there’s no way to tell if they are terrorists.”

Will the U.S do the right thing? That depends on what the country’s  definition of right is today. Is it right to let children die and starve in the streets of Raqqa while the U.S wastes 50 percent of its food a year?  Is it right that Muslim women are not allowed to read while kids in the United States wish they didn’t have to get an education?  Those are rhetorical questions, or at least they once were.