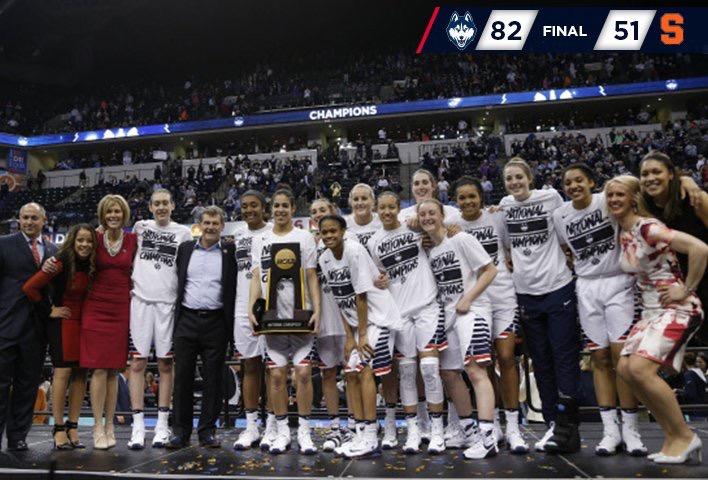 University of Connecticut seniors Breanna Stewart, Moriah Jefferson and Morgan Tuck made history last Tuesday by becoming the only college sports players to win a NCAA tournament championship for all four years of their college careers.

Not only did these 3 players make history, but the UConn coach Geno Auriemma also won his 11th national championship with the team, beating out UCLA men’s coach John Wooden for most all time championships in NCAA basketball history and tying NBA coach Phil Jackson for most championships of all time in the sport.

Breanna Stewart also became the only player to win most outstanding player in the final four during all four years of her college basketball career. Since these three seniors have arrived, UConn has gone 151-5 in four years, another NCAA record.

Losing the winner of the Dawn Staley Award for the nation’s top guard, Moriah Jefferson, along with the four time Naismith Trophy Winner awarded to the best player, Breanna Stewart, is going to be a hard blow. Without Breanna Stewart, Moriah Jefferson, and possibly Morgan Tuck, who has yet to announce if she will come back to play as a medical graduate student or declare for the WNBA, next year should be an interesting year for the Huskies.

However, one thing is certain: with the coach of the year Geno Auriemma as the UConn coach, it would not be a shock to anyone if the University of Connecticut wins five straight championships after next season.