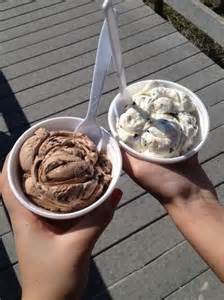 Ice Cream: a cold and delicious treat that is perfect on hot summer days.

But is it really limited to being acceptable in the summer?

While most people may say that ice cream is strictly a summer delicacy, students at Pentucket Regional High School have other opinions.

Sophomore Noah Elias-Guy shares his opinion and says “No. Ice cream is a dessert that can be enjoyed during any season, but personally, I only eat ice cream on harvest moons.”

Senior Jon Holewinski says that he enjoys eating ice cream “in the late hours of a cold winter night” and can “take down an ice cream cone at 1 am like it’s nothing.”

The common assumption that ice cream keeps one cool on a sweltering summer afternoon is what often leads to ice cream having the title of a “summer treat.”

However, a study has shown that ice cream, despite it’s freezing temperature, actually ends up warming the human body when eaten due to its caloric content.

Although ice cream can be enjoyed all year round, it is easier to access in the warmer months.  Ice cream venues tend to open back up again by the end of March into April, and stay open until about the middle of September.

Regardless of the equally arguable opinions upon ice cream being a summer specialty or not, it is still a delicious treat enjoyed by many that satisfies the human soul.