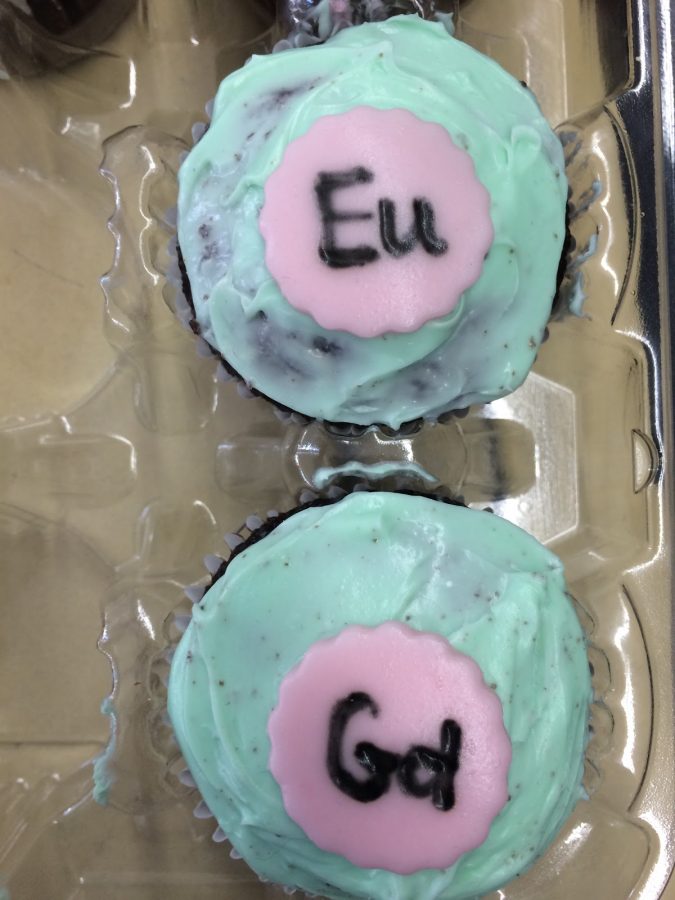 Sophomore chemistry teacher Ms. Lentz recently announced an extra credit assignment that combined the science of the Periodic Table of Elements and the fun of baking. “It was a win -win,” said Liza Russell, a sophomore in Ms. Lentz’ first period class. On Thursday, May 5, Mr. Goguen decided to allow his Honors Chemistry class to join the competition as well.

The assignment instructed students to create a periodic table made up entirely of cupcakes. On the day of the competition, judges, comprising of teachers and staff as well as students from the AP Chem class, completed a blind taste test of all of the cupcakes. Not only was taste and texture deciding factors, but scoring was also dependent on visual appeal, accuracy, and creativity.

Cupcakes had to have at least the full atomic symbol of the element on each cupcake, and each group must display at least 109 cupcakes (elements). Groups could receive a maximum of 18 points, which translates into 5 extra credit points on a quiz or a test.

Judging spanned four periods and the judges had an opportunity to see all the cupcakes. Displays were placed all over room 192 (Ms. Lentz) and several in 191 (Mr. Goguen).

There were a huge variety of sizes, colors, and flavors. Popular flavors included classics like vanilla and chocolate, as well as more unconventional types of cupcakes such as snickerdoodle or oreo. Cupcakes were organized by color and/or flavor to represent different kinds of elements or electron

groups. Groups were given the freedom to decide how to arrange their periodic table.

Students seemed to love the assignment. “I think it’s a great idea because it motivates students to learn about the periodic table in a fun and interesting way,” said Melina Demokritou, a student in Mr. Goguen’s class.

“It was the best chem class ever,” said Russell.

When asked her thoughts on the assignment, Ms. Lentz said “We’re talking about doing it again. We want to get some feedback from students and make it better.” She went on to describe the event as “cupcake madness.”

Although there are improvements to be made next year, as a whole, the event was a success, and Pentucket looks forward to next year’s “Cupcake Wars”!