Too Cool for School? 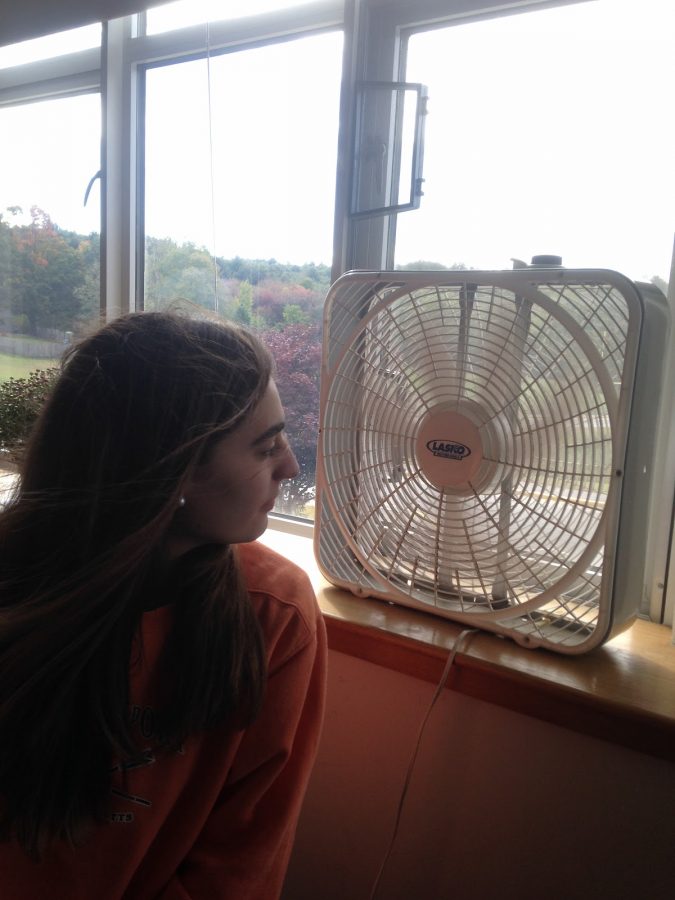 One thing is for sure, the sweltering students at Pentucket are not.  The last few weeks of summer are aggravating enough but suffocating in classes without sufficient air conditioning makes the transition into fall downright unbearable.

The absence of air conditioning is plaguing many public schools across the state of Massachusetts.  For some, the heat has gotten so intense that a few schools have been forced to close their doors.  On Wednesday September 9, the first day of classes for many schools across the state, officials for Framingham, Lawrence, and Quabbin Regional public schools chose to close early due to “inadequate cooling systems” (boston.cbslocal.com).

With temperatures reaching into the mid-90’s, Pentucket students are also struggling to start the school year off on the right foot.  Without air conditioning in most classrooms, students, such as Senior Rachel Thibeau, are finding it really hard to focus.

“It’s draining,” Thibeau says. “It tires you out.  By sixth or seventh period, you’re exhausted.  There is no way you can learn effectively.”  In an attempt to stay cool and focused throughout the day, Thibeau turns to water, seasonal appropriate clothing, and her folder which she keeps handy as a fan.

Senior Sarah Stewart also finds it difficult to concentrate amidst the hot weather.  “[The heat] definitely makes you sluggish and agitated,” she adds. “It makes it hard to work with people.”

Stewart also believes that, in addition to the lack of air conditioning, dress code is another factor contributing to the discomfort students experience while in school.  Like Thibeau, Stewart attempts to battle the heat by “dressing appropriately for the temperature.”  However, this is difficult for students who must abide by Pentucket’s strict dress code, which, as stated in the Pentucket Regional High School Handbook, prohibits girls from wearing “Tube tops, strapless tops, or halter tops,” “spaghetti straps,” or shorts that do not follow “the fingertip rule.”

However, it is not just the students who are struggling to accommodate the heat.  English teacher Ms. Cromwell, who swears by her spritz bottle, said, “I offer to spritz students, and I go to the office to do work when I can.”

This brings up another interesting debate.  Ms. Cromwell believes, “The distribution [of AC] is inequitable within the building.”  While upperclassmen and veteran teachers are missing the cool air-conditioned “mods” on these last hot days of summer, other teachers and staff members are enjoying the luxuries of AC every day.  From the main office, to the cafeteria, to the computer labs, anyone who has a class in these cool-zones gets temporary relief.

For some, this is once again raising concerns about the safety of the facility at Pentucket.  However, Assistant Principal, Mr. Evans assures students that appropriate measures were taken to ensure the safety of all students battling the heat.  “The Superintendent went to every building,” he said. “Teachers were sent to the cafe, some brought in their own fans, and we made sure to leave the doors to the cafe open to circulate air throughout the hallways. I handed out water and gatorade to all of my kids.”

However, like other schools throughout Massachusetts, Pentucket may be in danger of closing its doors due to heat in the future.  ”[The Superintendent] was aware other schools were sending their kids home,” Mr. Evans said. “If that was the best situation [for Pentucket], he would have taken appropriate measures.”

While school officials have secured appropriate methods for dealing with the intense heat, some students and teachers question whether it would be easier for air-conditioning units to be installed in classrooms.  In fact, some teachers are reminiscent about days when the English and History wing was being rebuilt.

When heating units were installed in the new English and History wing, the option to also install air-conditioning units became available.  However, with eight portable classrooms lining the parking lots, “They were more worried about the school getting back up and running,” says Mr. Evans.  Despite costing only a few hundred dollars per unit, Mr. Evans says, “It just wasn’t feasible at the time.”

Students and teachers struggling to get work done in today’s intense heat, however, are desperately wishing school officials had just decided to install the units.  Luckily, the first day of Fall is just around the corner and will bring cooler weather to Pentucket.