Back In the Day of Bart 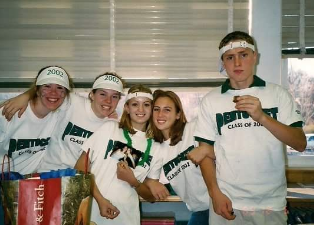 Mr. Bart graduated from the Pentucket High School in 2002. I interviewed him to see how high school was back in the day.

When he was in high school, he ran cross country and track. He did pretty well, considering he was the 4×4 record holder for track up until last year. Even though he excelled in sports, he did not excel at academics. He tried in the classes he enjoyed, but did not really care for the classes he was not interested in. The one class he did care for was World Foods, where students got to make food and eat it when they were done. He did not, however, care for the other classes like math. Mr. Bart told me how math was not the easiest subject and he struggled in it a little bit.

Even though high school was a short 14 years ago, the only difference he could think of is how the mods are gone now. The year before he was supposed to graduate, the mods were put in and after the floods, they were taken down.

When I asked him about school lunches he could not really say because he has not eaten a school lunch since he was given a raw chicken patty. The school is not extremely different since he had been here, but there have been some things that have changed.

Even though Mr. Bart had a lot of good experiences as a student at Pentucket, there was one bad experience he remembered that really stood out. When Mr. Bart got a ride to school one day, his friend’s car got hit by a bus. He did not get seriously injured, but he still came to school with a neck brace. When he went into his English class, Mrs. Ducolon told him to remove it because she knew he did not really need it, which he didn’t.

Even in the days of his high school career, there still was color day. Mr. Bart said he helped out on color day and enjoyed it. As many of you know, Mr. Bart still is a major part of the color day video, just like when he was in school.

After Mr. Bart graduated from high school, he went to college at Northern Essex Community College and then went on to Fitchburg State. He worked in television before he became a teacher.