The Exaggerations of No Man’s Sky 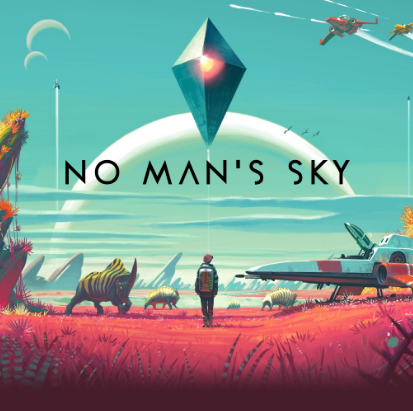 Advertising, in all forms has always been full of exaggeration to pull in a wide audience; in the case of “No Man’s Sky”, however, the use of exaggeration was pushed so far many consumers are calling false advertising.

In 2013, indie developer Hello Games revealed their stunning concept for a game, a procedurally-generated universe in which you could travel to over 18 quintillion planets. The game was met with large amounts of interest from gamers, press, and even Sony. Sony provided financial assistance to the developer (Hello Games) after they refused development aid. During the 2014 E3 (Entertainment Expo), Sony presented a new trailer for “No Man’s Sky” in their media event. It was met with enormous praise with several critics even stating that the event had “stolen the show.” No Man’s Sky was awarded the show’s “Best Original Game,” “Best Independent Game,” and a “Special Commendation for Innovation” award.

Before the game’s release, the founder, Sean Murray, began being interviewed on the game. Popular interviews included being a guest on “The Colbert Report” where he showed different areas of the trailer and gave more information on what the game will be as a whole. Another popular interview was a Q&A with the editor of “Game Informer,” a popular magazine that reviews and gives stories about video games and gaming technology. The interview was conducted in 2014 and gave crucial information about the game, including that the game would have multiplayer elements along with other interesting features. 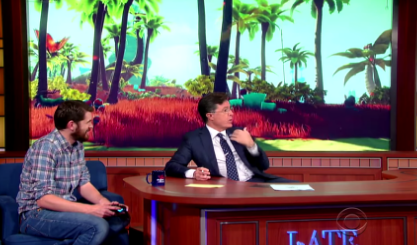 During the weeks before the game was released, some rare instances of people claiming to have leaked copies of “No Man’s Sky” began to sprout up along with screenshots and gameplay videos that seemed to lack many features that the founder, Sean Murray, had promised. Sean Murray waved these rumors off, telling fans they should wait so that the gameplay is not spoiled by people who got the game early. Critics were given early copies a few days later than usual, meaning that their reviews were not going to be out until after the universal release date. During this time, however, two players who both had gotten the game early streamed their experiences on Twitch and planned to meet up with each other. They managed to go to the exact same spot in the game and found that not only could they not see each other, but the weather and time of day were completely different for each player. This sparked major controversy as it became the forefront of news on the game and raised questions on what else Sean Murray had been untruthful about. Some skeptics said that this error could’ve been caused by server issues due to the fact that the game had not been released yet and was still in test phase. 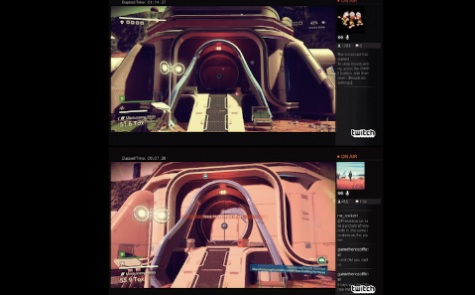 During the release of the game, many gamers reported large bugs that prevented them from getting past the main menu. After this, gamers were severely underwhelmed by the massive lack of promised content. One user in particular made a list in which he compared what Sean Murray and Hello Games had promised and displayed in comparison to the actual features of the game. The differences were appalling; features of the game that had been promised and showed off were nowhere to be seen at launch. Players turned to Sean Murray and Hello Games to reassure the community. However, they remained silent and refused to address any of the issues. Instead, the only updates that had been issued were info on bug patches and customer support. This left the community with many questions and no answers. Anger over the launch began to increase. Theories about No Man’s Sky’s launch began to fester and grow as the silence continued, many accusing Hello Games of misleading the consumer and misrepresenting the actual game’s content.

Footage of the gameplay trailer compared to actual gameplay 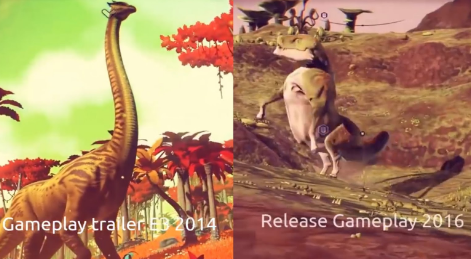 Buyers began sharing their stories of disgust towards the developer. Many buyers reported that Hello Games had actually replaced the original information on the case about there being online interactions, covering it up with a sticker. Sean Murray made a statement on twitter just before the release, saying that people should not buy No Man’s Sky for a multiplayer game as it was not that. Sean Murray had quite literally lied about the features of his game; he said numerous times during interviews before this tweet that there would be multiplayer option within the game. However, come release, there was no sign of it.

As unrest continued in the gaming community, many players sought refunds, rumors arose that popular PC gaming platform Steam was giving out refunds to buyers regardless of hours played. Steam clarified this issue by placing an orange box on the No Man’s Sky store page stating that the regular refund policy applied to this game and there would be no special exemptions. One reviewer on Steam expressed that the existence of a refund disclaimer says much more about the game than any opinionated review ever could. This shared view of the game was illustrated clearly in the reviews on steam, only receiving an abysmal 31% of reviews being positive.

As of today, neither Sean Murray nor Hello Games have commented on the response to the backlash. Sean Murray has not released any information from his twitter account, which was on hiatus for over a month. More recently, he began tweeting about an alleged hack that happened on the Hello Games twitter account. The Hello Games twitter account tweeted that, “No Man’s Sky was a mistake”. This post was quickly deleted but received tons of media attention. At first, there were supposedly emails sent out by Murray claiming that the tweet had been posted by a disgruntled employee. After these were sent out however, the studio claimed that their twitter along with Murray’s email account were hacked. This began to anger many people on Reddit who disliked the fact that Hello Games and Sean Murray had broken their silence only for a hacker, and not for the consumers.

Whether or not Hello Games or Sean Murray address this overwhelming response in the future, the effects of the initial release and the developers nonexistent response to the controversy will stand out in many gamers minds. If Hello Games had been more adamant in the defense of their game and increased their cooperation with the community, it would have stopped the spread of rumors and hatred that grew over the months towards the studio and their game. If anything, this could be used as an example for other game developers to learn about the ways to correctly advertise their product. A developer should strive to avoid misleading the consumer and to respond and communicate with any controversy and criticism on their game.