The End of Something Big… 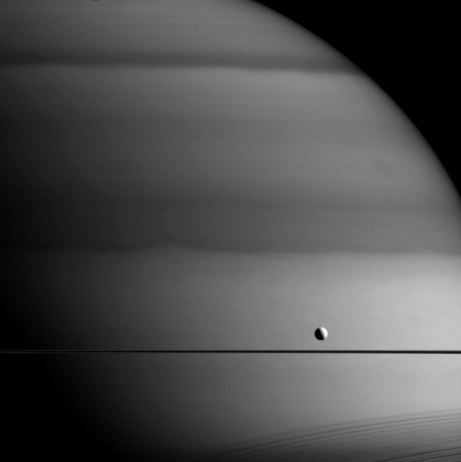 NASA’s unmanned spacecraft, Cassini, which was launched in October 15, 1997, has now come to a fiery end. Cassini’s demise was due to a planned entrance into our neighboring planet’s  atmosphere, Saturn, where it burned up. During the spacecraft’s lifetime the team behind it watched it make history. Not only has the spacecraft gone to places we never thought possible, but it has also made new and important discoveries about the planet.

Cassini has been observing Saturn for over 13 years and has been wandering space for 19 years. The satellite reached Saturn and entered its orbit on July 1st, 2004. Throughout its time orbiting saturn, the satellite awed astronomers at NASA with its findings about the large planet. Cassini’s most exciting discoveries have been Earth like moons that consist of water close to the chemical composition of our oceans. Some of the moons that orbit Saturn, Titan and Enceladus, were such a surprise to the scientists that they completely restructured the mission to get a better look at their new discoveries.

Titan, being the most Earth like, has a terrain containing rivers and lakes and has rain like here on Earth. NASA executed landings to get a glimpse of what life could be like on the Earth like moon. Scientist have concluded that after getting a better look at Titan, it could hold and sustain prebiotic, which is bacteria and basic building blocks for evolved life.

The second moon that caught astronomers attention, Enceladus, was overlooked as just a cold, icey moon at first. After Cassini got a closer glimpse of it, astronomers discovered that this was not the case. The moon carries a large subsurface ocean that could have or support water based life. Unfortunately, there was no landing on this moon so astronomers have limited research, however, astronomers can only imagine what lies beneath the deep waters of Enceladus. The moons have been a career defining discovery for these scientist. The team who worked on Cassini’s article, Cassini 10 Years at Saturn Top 10 Discoveries, have stated that,“Enceladus was one of the most exciting science destinations in our solar system”.

The important discoveries of Cassini have made a lasting impact in the scientific community.  NASA’s ceremony for the small satellite chronicled the years of its exploration, looking from the smallest discoveries to the most significant and how they have changed the way we see our planets.

It was a heartbreaking moment for the Cassini team as they watched their 19 years of hard work finally come to an end in a just a couple of minuets. Due to NASA not wanting Cassini to collide with a moon and contaminate its surface with earth microbes, some bacteria can live through the harsh environment of space and radiation, they decided to have a final event called “Cassini’s Grand Finale”. This ceremony captured every last moment as they sent Cassini into Saturn. NASA was able to say a final goodbye when the spacecraft plummeted into Saturn’s atmosphere, being burnt up by the planet it once observed.