When learning grammatical rules, students are typically taught pronoun antecedent agreement, meaning that if one wants to go on vacation, he/she should save up money. However, colleges such as Oxford University and Harvard University are opening up to gender neutral pronouns such as “ze” and “they” as a way of including gender non-binary students.

The use of gender neutral pronouns has been debated for some time, but took a leap forward when Oxford University produced a leaflet in 2016 with information about these pronouns. This information is meant to make colleges more inclusive of transgender and gender non-binary students, and other colleges have followed, including Cambridge University and Harvard. Many colleges now feature information on pronouns on their websites.

So the question remains: What is the relationship between inclusivity in the classroom and traditional grammatical rules?

Mrs. Ducolon, English teacher at Pentucket acknowledges that the use of “they” as a gender neutral pronoun can sound “awkward,” but also explained she would “much rather have awkward than offensive.” She does not ask students their pronouns in class, but she does this in order to respect students who are not out yet. However, Ducolon explained that she would be more likely to ask students their preferred pronouns in a college setting or even in a club after school. Overall, she is supportive of gender neutral pronouns, as she wants to be “inclusive of all my students.”

Mr. Ruland, head of the English department at Pentucket, understands the controversy of gender neutral pronouns but believes that it’s “somewhat of a fringe movement rather than something that’s like widely accepted.” He does not ask students their preferred pronouns because he feels there is no need, as he addresses students directly using their names. Regardless, he feels that “on a questionnaire it [a question about preferred pronouns] would be perfectly appropriate,” and he would be open to integrating gender neutral pronouns into his curriculum if it became more widely accepted in high school settings. 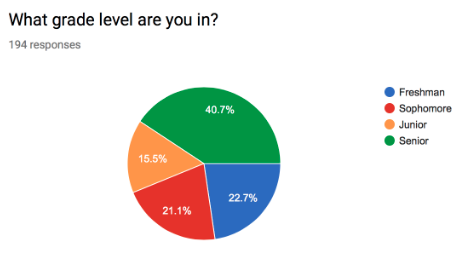 Student data, on the other hand, yielded mixed results regarding opinions on gender neutral opinions. In a survey primarily taken by seniors (see graph), most students use he/his and she/hers pronouns. However, seven Pentucket students (3.6% of survey takers) use they/theirs pronouns. Following these preliminary questions, students were asked about their opinions on gender neutral pronouns; should they be taught in high school, and should teachers at Pentucket be asking students their preferred pronouns? The results of these questions were extremely split; disregarding those who answered “not sure,” the discrepancy between those in favor of gender neutral pronouns taught in high school and those who weren’t was 1.5%. However, 38.1% of students who took the survey believe that teachers should be asking students their preferred pronouns,as is done at colleges like Vanderbilt University. 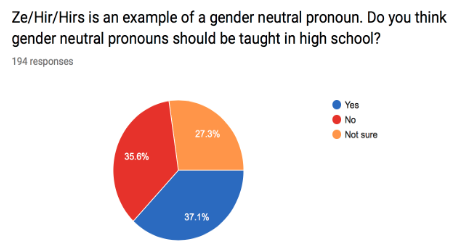 Mr. Ruland explained that he would be more apt to integrate gender neutral pronouns into the classroom if they became accepted by the majority. However, as one of the top public schools in Massachusetts, we must consider: shouldn’t we be leading the way in showing acceptance of all people, not just waiting on the majority?