Halloween Costumes Throughout the Years 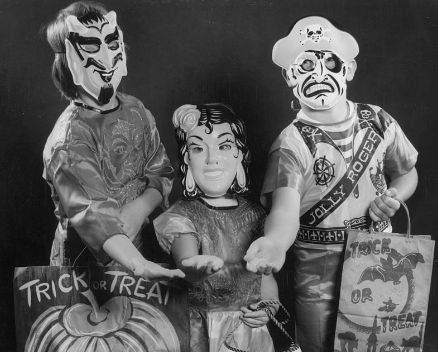 Halloween has been a popular tradition for over 2,000 years since it was first celebrated. It represents fall, candy, dressing up, jack-o-lanterns and more. Why wouldn’t a child look forward to such a joyous holiday filled with candy and having a creative costume? Creative halloween costumes are not an easy thing to come up with and often kids or adults will just resort back to a common and ordinary costumes. But even those change drastically through the years, for instance…

1890s: Simple witches or fairies were common back then, which shockingly enough were very creepy.

1900: Masks were common costume at this time. People of all ages made eerie masks representing witches, ghosts, clowns, soldiers and whatever this is…

1920s: This era was filled with flapper girls and glamour, however Halloween was basically the opposite. People of all ages dressed in some very odd costumes, including this sort of ghoul shown in this picture. Also featured are some very unusual halloween decorations.

1930s: Over 80 years ago, people took inspiration from movies. Except, evidently from this picture, the costumes were much less glamorized compared to today. From first glance this costume looks like a mummy, but it is indeed someone’s version of the main character from the 1933 thriller, The Invisible Man.

1950s: Some things never change. These kids were just in it for the candy, similar to people now.

1960s: Well, another time period where masks took over Halloween costumes. Except they are a little less scary… finally!

1970s: Before robots were actually invented, people dressed up as them. Their costumes were nothing like what robots actually look like now. There were much more boxy.

1980s: Back to the creepy masks. This time they are inspired by popular shows at the time, Strawberry Shortcake, Oscar the Grouch, and The Cookie Monster.

2000s: Finally the 2000s. Most people took costumes from movies that took over the country, such as Mean Girls. Basically the quintessential chick-flick movie and perfect for 5 teenage girls.

Have you ever dressed up uniquely for Halloween? Let us know and leave the costume idea and a picture down below in the comments. Happy Halloween everyone!