The Stories of Ocean Rescues 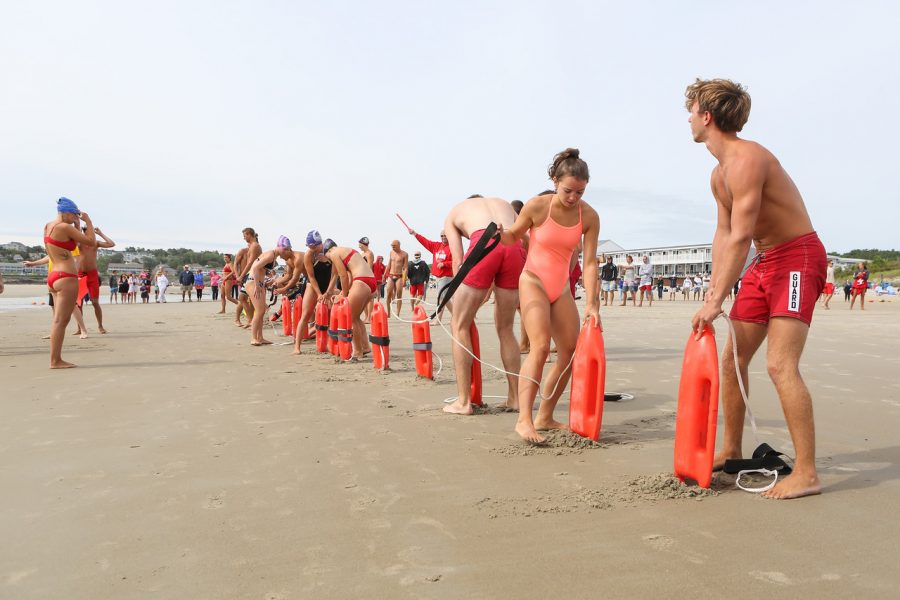 It is a daunting and fearful undertaking when you see someone sprawled on the ground breathless, or see someone struggling to swim in six foot waves.  But to gather the courage to provide help in said situations is a whole other level of fear. Some of the intimidating responsibilities ocean lifeguards face, we do because we are dedicated to helping others. During the summer of 2017,  we (Korey and Siobhan) worked as lifeguards on Salisbury Beach, where it was a daily expectation to meet this standard of conquering fear for the safety of others. In addition to the day by day obligations of a lifeguard on Salisbury beach, we, along with our coworkers, have experienced many scary situations while on duty. At the age of 16 we have already encountered situations that will influence our lives forever. The following stories are from the point of view of just one of our many unbelievable events taken place at the beach.

Growing up so close to the ocean, I have always spent my summers there with family and friends.  But when I decided to be a lifeguard at the beach, my leisure time there will never be the same.  I have been trained to keep my eyes on the water at all times, no matter the situation.  Even while walking in the opposite direction, or if there is no one in the water, you have to be able to keep your focus on the ocean.  It takes a lot of getting used to, but now it is second nature for me to walk backwards to get around the beach in order to keep observing.  Now, my visits to the beach are much more infrequent since I am usually working there 40 hours a week. When I do go, I still find myself watching the water as if I were on duty.  The days at the beach are long, but I never dread going to work.  We do a workout to stay in shape each morning at nine, which usually involves 600 crunches, followed by a combination of running along the soft sand, swimming courses marked by buoys, and paddling on rescue boards.  We then call on, or officially go on duty, at 10:15.  The day includes two or three 20 minute breaks if needed.  Call off at the end of the day is at 5:45.  On a nice day, we will go for a swim after work as well, or walk to the center of Salisbury to get food while waiting out the beach traffic.  The day becomes a lot less monotonous if you enjoy being with your coworkers both in and out of work.

In between these daily consistencies, we provide assistance to those whose lives are in danger in both big and small situations.  Unlike Korey, I was fortunate enough to never experience any large medical issues.  I was able to save the life of a young boy from a riptide on the stormiest day of the summer.  He was floating on a boogie board amongst dangerous crashing waves, and the rip current was taking him right out to sea. His legs were kicking but he wasn’t moving anywhere, and that’s when I knew he needed help.  My instincts kicked in and I forgot about my fear of not being able to survive the huge waves myself.  When I was finally able to bring the boy to shore, his parents expressed their gratitude for my help.  It is those moments that make lifeguarding so rewarding, when you know you truly made a difference in someone’s life.

Ever since Freshman year of High School, I personally want to go into the military as a medic and then eventually go into the medical field as a doctor or surgeon. So naturally I was attracted to the job of lifeguarding on the ocean. I always knew their was a chance that I would have to save someone, but when someone actually needs help, fear starts to take control and you start to question, am I really ready for this? Your mind goes through these phases of doubt and questions, but the difference between a good lifeguard or any sort of emergency responder, is not how much you are trained for the situation but rather the psychological readiness the events outcome may strike. Sometimes, things can be complicated and out of our reach, but in a field like this, one has to be ready for any such outcomes.

Walking up the inclined beach I saw a man, who had a bloated gut and was severely out of shape, start to kneel. I thought nothing of it as I see similar characteristics all the time in the center of Salisbury as well as the appearance made him only seem winded from a run. As I got closer I saw a regular passer by ask the kneeling man if he was okay and almost as if it was a response to the man’s question, he collapsed. I immediately turn to my fellow lifeguard behind me who was currently watching the water to call first aid to get emergency services. I then ran to the collapsed man and that’s when I noticed the strange condition of the man. He had cuts and marks all over on his arm, such as the ones that would be from passing somewhere rough in a awkward position. The man was severely red and sweating, immediately I determined it as heat exhaustion that was nearly about to border into a full on heat stroke. He was fortunately conscious, however barely, his slurred speech and lack of awareness made it hard to get any information. I yelled over to a woman standing by in awe, and told her I needed her towel. I then ran down to the water and passed by my fellow lifeguard, who informed me First Aid was coming our way. I quickly told him it was heat exhaustion. Catching onto my actions, he grabbed his own towel and followed in my steps. We both got our towels wet by the ocean and ran over to the man and immediately placed the towels around neck and armpit area. There was nothing else that we could do but keep him cool and try our best to comfort him while the EMTs made their way to the post. After a while of waiting, I found myself looking around for anything to cool him, such as getting cold water and or finding objects to cover him from the sun.

By the time the EMTs got to the man, we thought he was likely cooling down his body temperature just in time. The EMTs took him away and informed us that he seemed to be doing fine. However, a couple days later, me and the other guard that helped me found out that the man was in a far worse condition then we assumed. He was apparently undergoing a brain bleed/ brain hemorrhages by the time we got to him. The man underwent surgery and recovered from his brain bleed. It is unfortunate knowing that what we did was not really helping him due to the man not actually having a heat stroke but rather far worse. However, we did what we were trained to do  and there is nothing else we could have done. Since then I have only heard that the man is still alive, however, not without physical and mental scars. Even after the emotionally stressful event, us lifeguards still put on a professional face to continue watching the water on the many days spent on Salisbury beach.