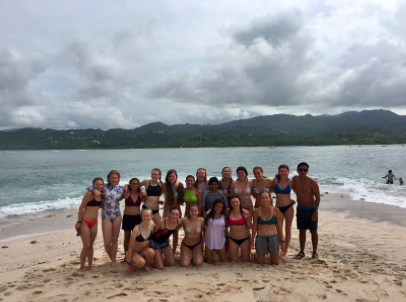 Over the summer, I went on a Rustic Pathways trip to Costa Rica. The program I went on was called the Nicoya Turtle Expedition and it was 16 days long. It was a community service trip with a focus on sea turtles. My group had 15 girls, and three group leaders. This trip consisted of 9 days spent on a beach reservation called Camaronal. The remainder of the trip was spent in a small, family-run hotel.

During the first part of the trip, we spent the days cleaning up the beaches and getting to know each other. At night, we did night patrol. This consisted of walking onto the beach for three hours each night and looking for turtles nesting and then collecting their eggs and putting them in the protected area. Night patrol was at a different time each night depending on the tides. This ranged from 9pm-12am to 12am-3am. With this, we had to wake up by 7am each morning. This schedule was tiring but seeing the turtles made each night exciting. This was our first stop in Costa Rica and the community service work was rewarding because we got to see the turtles and other sea creatures that we helped. We also ended up being able to watch turtles hatching. Overall, my time at the Camaronal Reservation taught me about how beaches get polluted and what I can do everyday to help the environment.

The second part of the trip was spent at a different location; we stayed in a family-run hotel. We had finished our community service and we got to participate in various activities special to Costa Rica. I surfed for the first time, ziplined over the rainforest, kayaked, snorkeled and went on a boat ride looking for sea life.

Each day, when we had downtime at the hotel, we would walk down to the beach and swim in the water. The waves were much bigger than any waves I had ever swum in before and we spent hours swimming without noticing how much time had gone by. I learned that these waves were not unusual for the Pacific Ocean, this is also why surfing is such a popular attraction on the Costa Rican beaches.

The time that I spent on this trip was so enjoyable because of the community service we did and the culture that we were introduced to. One of the three program leaders, Josue, was native to Costa Rica and throughout the course of the trip we got a good insight as to how Costa Ricans live each day. We were also able to learn about the values of the country through the conservation work that we did. One of the most important values to Costa Ricans is land conservation, which is one of the reasons why the country is so green. Additionally, Josue had taught us about how the Costa Rican government is run. This insight was valuable for allowing me to learn about Costa Rica better.

I was grateful to be able to do community service and to meet all the people in my group, as well as the native Costa Ricans. Going with a group like Rustic Pathways allowed me to see the culture and get involved in the country in a unique way.