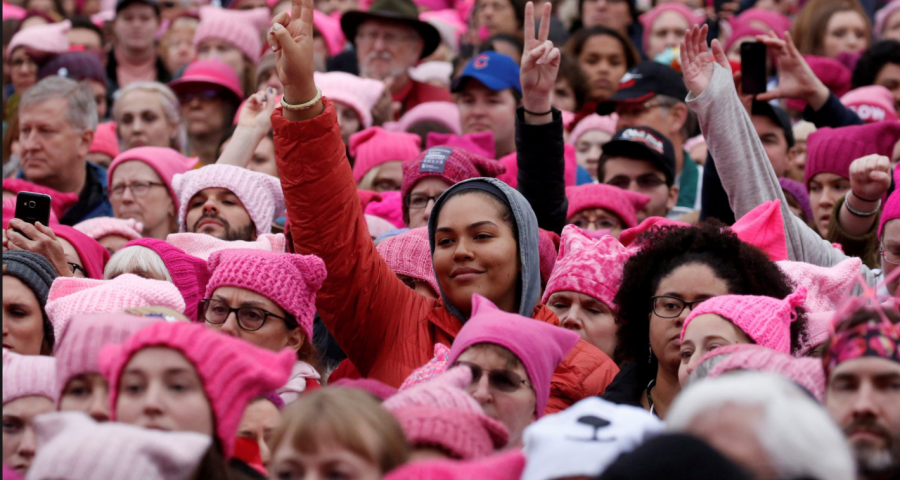 On Saturday January 20 , the second Women’s March was held. Protests were held in numerous cities across the United States, including Cambridge, New York, Philadelphia, Washington D.C., and Las Vegas. There are were also protests internationally, including some in Asia and and Africa.

According to Yahoo News, the estimate of number of active protesters in total ranges from 3.3 million to 4.6 million. In Austin, police estimated that about 50,000 people attended. In New York, there were an estimated 200,000 protesters. In Chicago, approximately 300,000.

Protesters expressed support not only for women’s rights, but also rights for the LGBTQ+ community, immigrants, and other social and political causes. Many signs were also targeted towards opposition of Donald Trump.

Along with the signs, the Women’s Marches across the country featured notable speakers. In Los Angeles, actresses Scarlett Johansson and Laverne Cox spoke. In New York, founder of the #MeToo movement Tarana Burke spoke along with singer Halsey. In Halsey’s personal and emotional speech, she explains various encounters she has had with sexual harassment. She recalls waiting in Planned Parenthood in 2009 with her friend: “best friend Sam was raped by a man that we knew ’cause he worked in the after-school program. And he held her down with her textbook beside her, and he covered her mouth and then he came inside her. So now I’m with Sam, at the place with a plan, waiting for the results of a medical exam. And she’s praying she doesn’t need an abortion, she couldn’t afford it. And her parents would, like, totally kill her.” She also mentions her own experiences with sexual assault, remembering how  “We’ve been fighting a lot, almost 10 times a week and he wants to have sex, and I just want to sleep, but he says I can’t say no to him, this much I owe to him.”

Goals of the Women’s March

The second Women’s March was meant not only to empower women and social causes and stand up to misogyny, but gather support for the #PowerToThePolls initiative, which was launched in Nevada. The goal of the #PowerToThePolls movement is to register voters, but was organized in Nevada specifically because of potentially vulnerable Senate and House seats.

The #PowerToThePolls division of the Women’s March website further explains

that “This anniversary event in Las Vegas will kick-off a national voter registration and mobilization tour targeting swing states to register new voters, engage impacted communities, harness our collective energy to advocate for policies and candidates that reflect our values and collaborate with our partners to elect more women and progressives candidates to office.”

Link to the #PowerToThePolls chapter of the Women’s March Website: https://www.womensmarch.com/power-to-the-polls/

Missed the Women’s March and want to get involved? Here are some ways to do so:

Host a “Huddle”: Huddles are meant to allow feminists to congregate and work to make a difference. At a huddle, groups can share goals, write letters to government officials, and moree. More information about huddles here: https://www.womensmarch.com/100/action2
Contact your mayor to petition to make your city a sanctuary city (a sanctuary city acts similarly to a safe haven for immigrants).
Donate to the #PowerToThePolls initiative: https://www.crowdrise.com/o/en/campaign/powertothepolls .