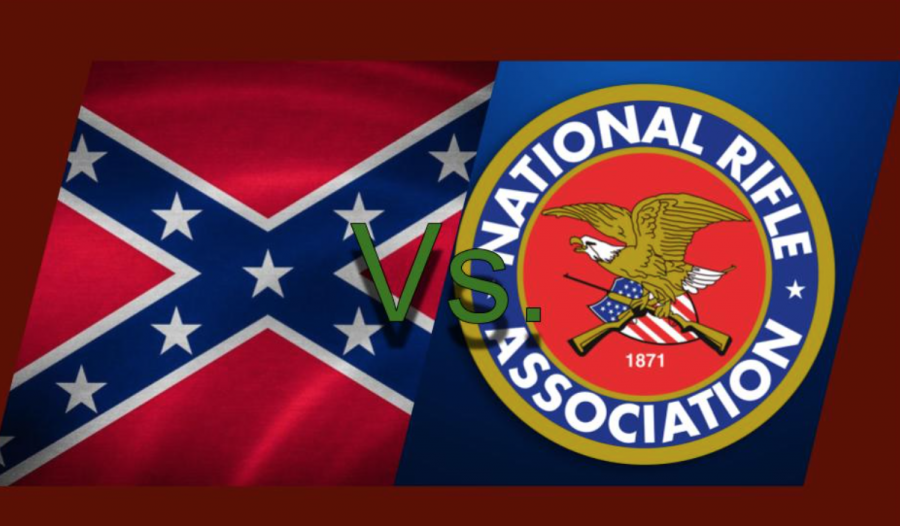 In the early 1800s, the Northern United States became unsettled with the idea of owning humans, also known as slavery. They banned slavery in their states, and then passed a law making all states past the Missouri compromise line slavery free. However, the Southern States had no moral qualms over slavery; it was just their way of life. The North began to attack the issue of slavery as fast and hard as they could. In retaliation, the South defended slavery just as strongly as the North had attacked it.

Today, however, the United States of America (USA) is having similar issues over the idea of gun control. There is so much gun violence in the country that certain states, students, and adults are trying to ban guns altogether. Other states, however, do not believe that guns are an issue; some of these states even want to go as far as to drop all gun restrictions. Their argument: guns are just a way of life. In the 1800s, as well as today, the US government is split over a controversial issue, is creating compromises, and has parties that use the US Constitution for their defense.

States in the US are currently split between states who want more gun control and states that want little to no gun control, which is remarkably similar to the states in the 1800s which had similar splits over the issue of slavery. The states that are against each other today were against each other 150 years ago. Today in the United States, there are a handful of states with strong opinions on gun control. According to the article, “Where each state stands on gun-control legislation” posted by USA Today, states that have a strong opinion on raising gun control are New York, Massachusetts, Rhode Island, Connecticut, New Jersey, Delaware, Maryland, and other Northern states.

The article goes on to say that states that want to loosen the restrictions on gun control include Wyoming, South Dakota, Arizona, Kansas, Texas, and Tennessee (“Where Each State Stands on Gun-Control Legislation” 2-3). There were also sides taken in the 1800s over the issue of slavery. Some of the Northern states that wanted to end slavery were Maine, Vermont, Massachusetts, New York, New Jersey, Delaware, Pennsylvania, Ohio, and all the other Northern States. The states that wanted to defend slavery as a right were Texas, Florida, Georgia, Arkansas, Tennessee, and other Southern states. The same states that were debating and fighting against each other in the 1800s over slavery are still against each other today on the topic of gun control.

In the early to mid 1800s, the Southern states fought against the North to keep slavery; the Northern states helped to abolish slavery and opposed the Southern states. While the states are no longer fighting over slavery they are still having political battles and riots over issues. The states of New England strongly support gun control, but the states of Texas and Tennessee, in the south, are fighting to loosen gun restrictions. It may be a coincidence that the states which support gun control also supported abolition, and that states which do not support gun control did not support the freedom of slaves 150 years ago. This correlation suggests that the Southern part of the US still has a very different perspective on controversial issues than the North does, and that the cultures of these two sections have not changed much in the last 150 years.

In the government today, senators are still making compromises as they were back in the time of the Civil War; these compromises still only partially satisfy the political parties that they are made for. Recently after the tragedy at Parkland High in Florida, the president issued a bill to make bump stocks illegal, but the bill still has not passed. President Trump and senators have decided that it is time to drill down hard on gun control and try to end gun violence. Even though this compromise is in the making, states that want gun control are still not satisfied, but want even more control. The banning of all automatic and semiautomatic weapons would be a step in the right direction for these states.

Similarly, if one travels back to the early 1800s they would find the government making a compromise that would later be called the Compromise of 1850. The senate had to make a compromise in an attempt end the tensions between the states; many felt that if a compromise was not made there would be war. This compromise was made to benefit both the South and the North, but it seemed to do more bad than good. The Compromise of 1850 banned the slave trade in the country’s capital, Washington, D.C. This benefited the North, but angered the South. The next part of the compromise stated that any slaves that escaped into the North had to be returned to their owners. The people of the North were required by the law to become slave hunters, and if they did not cooperate with the slave roundup then they could be jailed and fined. The South was ecstatic over this compromise because it meant that they could get their runaway slaves back. However, the North was beyond enraged and its citizens did not want to be required to take part in an activity that they believed to be morally wrong. The Southern states and Northern states are making compromises together as they were 150 years ago, and the views on restrictions still hold true for both areas; the South wants to decrease restrictions while the North wants to increase them.

The Constitution of the United States of America has been a problem during large scale debates now and in the 1800s as well; in both times there have also been organizations that were scorned by most of the nation, and that used the Constitution to defend their political stance. The second amendment of the US Constitution is all about guns, and it states that “A well regulated Militia, being necessary to the security of a free State, the right of the people to keep and bear Arms, shall not be infringed.” To many pro-gun control activists, this amendment means that a well regulated attack force can be assembled by a state if it becomes necessary for the state to defend itself; this right cannot be taken away. To the National Rifle Association (NRA), this amendment means that the people have the right to own and bear arms, and this right cannot be taken away.

The NRA is constantly bringing up the Second Amendment in all of their talks about protecting gun rights. They are using the Constitution like a shield, a tool of defense. The results of these different views and current events such as school and public shootings, there have been many people rioting against the NRA and what it stands for. On March 14, 2018, there were country wide walk-outs in which high school students from all over the country walked out of their schools in silent protest against gun violence and those who support gun rights. The NRA has become very unpopular among the nation’s people because of their views on guns. If one looked at the South’s reasoning for keeping slavery in the 1800s, one would find that they used the Constitution as protection as well.

Once, a slave owner took his slaves up into the North, therefore making them free, but one of his slaves realized this and went to court to sue. His name was Dred Scott. Dred Scott’s argument eventually got all the way to the Supreme Court and after some debating they decided that, according to the Constitution, there is no such thing as a free state. They also proclaimed that African Americans had no rights, therefore, they could not go to court. After this decision, the South used the Supreme Court’s ruling to protect themselves and their ways of slavery. In a way, the South during pre-Civil War diplomatic arguments is a lot like the NRA; they both have been scorned by the rest of the country, used the Constitution as a defense tool, and both have been the topic of national uprisings because of what they stood for.