Red Sox make it to the World Series 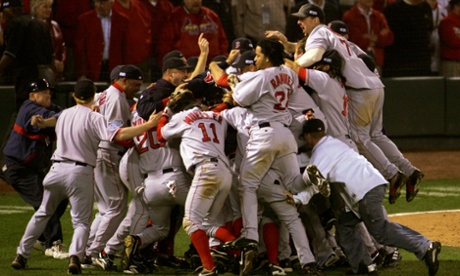 Is it luck or is it talent?

As the World Series begins, for the fans of the 28 teams outside Boston and St. Louis, a long winter of wondering what went wrong already is under way.

But for the Red Sox and Cardinals, what went right?

Are these teams lucky, or are they talented?

The Boston Red Sox along with the St. Louis Cardinals have made it to the 2013 World Series, a feat that is unimaginable for most Major League players. This is not the first time these two teams will meet. They have previously met in the 1946, 1967, and 2004 World Series.

Since 2004, the Red Sox have not lost a World Series game. The streak started when they swept the Cardinals in 2004, and continues with the ’07 win verse the Rockies. The ’07 World Series was the last time the Sox made it to the big stage, until now.

In their first game of the 2013 World Series, the Red Sox continued their World Series winning streak with an 8-1 victory over the Cardinals.

Looking back, the Boston Red Sox began life as one of the most successful baseball teams of the American League, a position which they currently are back in after an extended period where they weren’t that successful.

Having not made the playoffs in the past three years and starting the season with a new manager, Boston fans weren’t necessarily predicating a run to the World Series.

The Red Sox went 97-65 in the regular season and led the American League East.

Some people may say that the one thing the Red Sox have done right is that they execute. The pitchers have executed from a pitcher’s standpoint, the hitters have executed, and the Sox are playing on the defensive side of the ball. Ultimately, one can talk of many different reasons as to why the Red Sox have made it to the World Series, but the teams that execute the most and do it most consistently win.

Other people may say that the players on the team have talent, and they always come out to win. It starts from the top and filters down. If one of the players doesn’t get it done, the next guy does.

Another aspect is the players’ desire to win. According to sportingnews.com, Outfielder Jacoby Ellsbury said, “We have good players on our team. We have a good time. I think the fans can see that. We enjoy playing with one another. We enjoy just competing. I think that’s the biggest thing, is through the course of the season, you have a lot of guys that just love playing the game. I know the fans can see that.”

This year, unlike the past three years, the team seems to be playing as one. At team that plays as one will always beat a team that relies on individuals.

Every game, the Red Sox come to compete. All season long, the players prepare mentally and physically for an opportunity to go to the World Series.

Now, here they are, on the big stage.

So is it luck or talent?

The Boston Red Sox are clearly a talented group of athletes because luck does not carry a team all the way to the World Series. Luck does not win a team the American League East title. The player’s hard work and talent have got them to the place that they are in today. Perhaps there has been some luck in the sense that most players only dream about making it to the World Series, but the Red Sox’s luck is a reward due to their hard work throughout the pre-season and regular season.