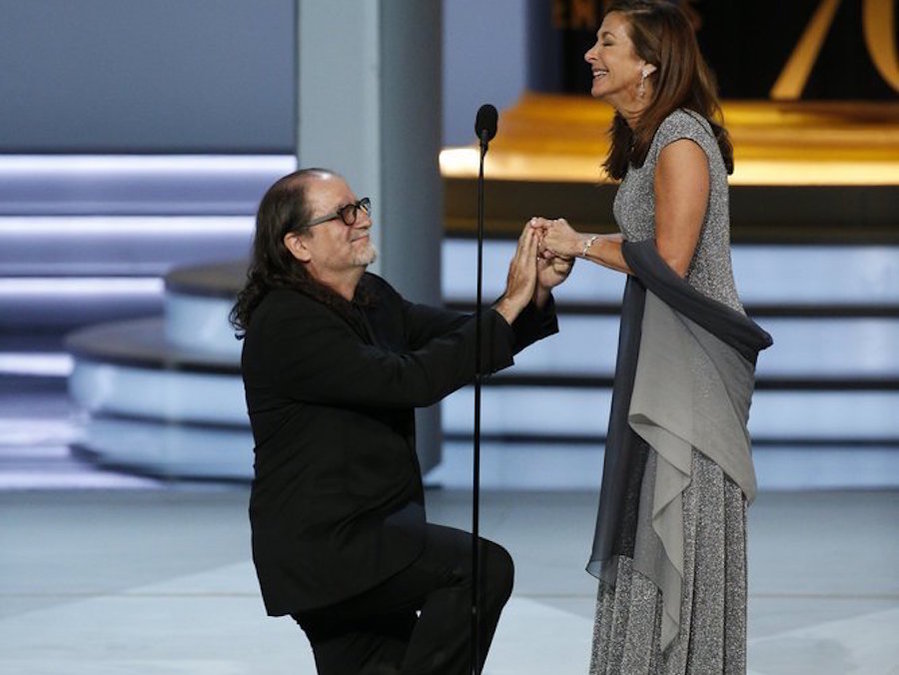 Glenn Weiss "Directing - Variety Special for The Oscars" proposes to his girlfriend during the 70th Annual Primetime Emmy Awards held at the Microsoft Theater on September 17th, 2018.

The 2018 Primetime Emmys celebrated their 70th show on Sept. 17. “The Marvelous Mrs. Maisel” took home the most awards with five wins, including Outstanding Comedy Series, followed by “The Assassination of Gianni Versace: American Crime Story” with three.

The award ceremony was hosted by Saturday Night Live stars Colin Jost and Michael Che. They poked fun at the limited diversity on television throughout the night, such as cracking jokes about “an all-white reboot of ‘Atlanta’ called ‘15 Miles Outside of Atlanta.’”

Even opening the show, stars Sterling K. Brown, Kristen Bell, Tituss Burgess, Kate McKinnon, Kenan Thompson, and John Legend sang a song called “We Solved It,” which came to the jesting conclusion that “diversity is not a problem in Hollywood anymore.”

Aside from there not being as many colored winners as those nominated, the colored community received representation from John Legend winning as an executive producer for “Jesus Christ Superstar Live in Concert” at the Creative Art Emmy Awards. This win has not only made him one of fifteen Emmy, Grammy, Oscar, and Tony (EGOT) winners, but also the first African-American to receive EGOT status. There were also notable wins from Thandie Newton (“Westworld”), Regina King (“Seven Seconds”), and RuPaul (“RuPaul’s Drag Race”).

Glenn Weiss, winner of Outstanding Directing for a Variety Special shocked the audience and at-home viewers by proposing halfway through the night. While accepting his award, Weiss gave a shout out to his girlfriend, Jan Svendsen, calling her “the sunshine in my life.” He continued saying, “You wonder why I don’t like to call you my girlfriend? Because I want to call you my wife.” An awestruck Svensen then made her way to join Weiss on stage where he got down on one knee and asked her to marry him.

The program also included a memorial for the men and women of television who passed in the following year, such as Aretha Franklin, Burt Reynolds, and Neil Simon. Betty White made an appearance as well, making a speech in recognition of her eighty years in show business that got a standing ovation from the audience.

Awards presented prior to the live show can be found at the Emmys’ website here; http://www.emmys.com/awards/nominees-winners/2018

Below are the winners from the night’s awards.

Outstanding Directing for a Limited Series – Ryan Murphy, “The Man Who Would Be Vogue” “The Assassination of Gianni Versace: American Crime Story” (FX Networks)