Eminem vs. Machine Gun Kelly: A Recap of the Rap Beef 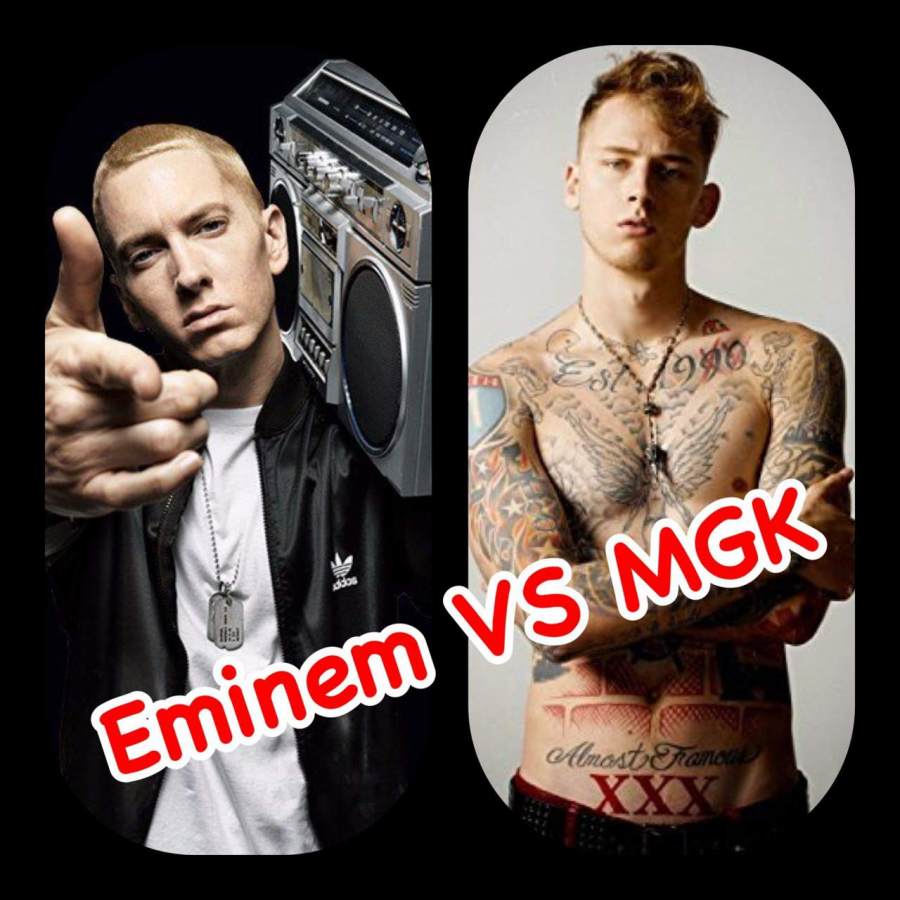 Eminem has had a long history of dissing and beefing with fellow musicians and rappers such as Canibus, Insane Clown Posse, Mariah Carey, and most notably, Ja Rule. It comes as no surprise to longtime fans to see The Real Slim Shady engaged in yet another war of words.

The motivation for Eminem’s initial diss and response track stem from past subliminal disses and a controversial statement from when MGK tweeted in 2012 about Eminem’s daughter Hailie Mathers, calling her “Hot as f***.”

At the time Kelly published the tweet, Hailie was only 16, making the tweet a turning point in their feud. In Eminem’s first jab at Kelly on “Not Alike,” he states “But next time you don’t gotta use Tech N9ne, if you wanna come at me with a sub, Machine Gun,” referencing MGK’s feature on rapper Tech N9ne’s diss track, “No Reason,” directed at Eminem. Eminem plays with the name “Machine Gun,” changing it to “Sub-Machine” because as he states, he wants to hear Kelly diss him without hiding as a featured artist on a separate artist’s track.

Eminem once again attacks Kelly for his past comments on his daughter a few lines later, stating; “I don’t use sublims and … don’t sneak-diss/ but keep commenting on my daughter Hailie … in case you forgot really and need Ja memories.”

Here, Eminem calls out Kelly for his old tweet and references old beef with rapper Ja Rule, who called Eminem’s daughter a future “sl**,” because he claims her mother, Kim Mathers, is one. Eminem and his former rap group D12 then released a brutal response to Ja Rule called “Hailie’s Revenge,” which was considered by many to be a knockout punch to Ja Rule.

As many punches as Eminem threw, MGK released his official diss to Eminem, “Rap Devil,” on Sept. 3 on the WorldStarHipHop official YouTube channel. Shortly after its release the track gained attention, and had a generally positive response from most listeners and critics, giving Kelly the upper hand. “Rap Devil” attacks Eminem from the perspective of a fan like MGK, and uses compliments to insult them, such as the line “Homie we get it your the greatest rapper alive … dweeb, all you do is read the dictionary and stay inside.”

Until Sept. 14, a whole two weeks after Kelly released “Rap Devil,” Eminem laid low only releasing a few cryptic images, which circulated the internet, including one of him standing in front of a Pac-Man arcade machine, a subtle reference to one of MGK’s various tattoos.

Then, Eminem released the viral “Killshot” diss track.  The track garnered over 38 million videos within its first 24 hours up, breaking the YouTube record for the most views on a rap video within the first day of uploading.

“Killshot” attacks Kelly on a personal level, calling Kelly a “mumble rapper” and making fun of his “man bun,” as well as jokingly mocking the first few lines of “Rap Devil,” in which Kelly calls Eminem’s facial hair “weird.”  “Killshot” showed that while taking a while to respond to Kelly’s threatening “Rap Devil,” Eminem crafted a brutal diss that leveled the playing field.

MGK responded, after hearing the track on Twitter, by posting a quick statement saying, “2 weeks and 3 interviews later,” proceeded by a hashtag #legshot, taking a quick jab at the response track’s name, “Killshot.”

After false claims arose that Kelly was booed off stage while opening for the popular band Fall Out Boy, and many questioned whether the beef is even real, given that producer Ronnie J was featured on both tracks.

Now, it appears as though the beef has simmered down.  Kelly further clarified this on The Breakfast Club radio show on Sept. 17 when asked about Killshot and Eminem. Eminem is currently riding the success of August’s Kamikaze and Kelly appears content with the reception of his new track “Binge,” released on Sept. 21.

Whether real or fake, the beef between the two rappers has certainly been incredibly interesting for fans to watch play out.