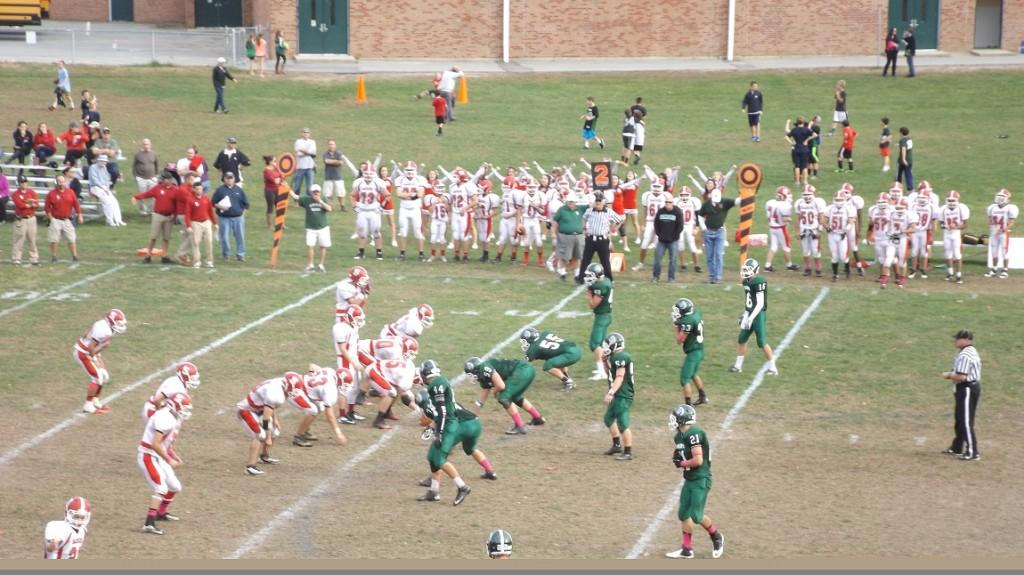 After defeating Saugus in their 27-10 victory, the Pentucket Football team clinched the Cape Ann League Large title for the first time since 2002.

Pentucket came out flat in the first quarter. Saugus scored the first points of the game with their field goal that put them up 3-0. The ball was kicked to Pentucket but they went three and out, and punted on the 4th down. Saugus then scored quickly to go up 10-0.

Pentucket started off with the ball at the beginning of the 2nd quarter. Jeff Porter scored a long touchdown run, putting the Sachems on the board. Pentucket’s defense made a stop, forcing Saugus to punt. With time running down, Ryan Kucher (QB) found DJ Engelke in the end zone, throwing a long pass to put Pentucket up 14-10 at the end of the half.

Saugus had the ball to start the fourth quarter, but Pentucket stopped them. Pentucket then had a long drive with a short touchdown run by DJ Engelke to put them up 27-10. Pentucket stopped Saugus with the clock running down, and the game ended with a final score of Pentucket 27 Saugus 10.

Saugus came out to compete, but Pentucket gave it all they had.

Freshman football player, Patrick Freiermuth, when asked how it felt to be 5-0, said, “It feels great. I feel like the team is unstoppable and if we play hard every game we can accomplish anything!”

Pentucket’s Head Coach, Steve Hayden, when asked how it feels to have clinched the Cape Anne League Large Title, said, “I don’t think we’ve clinched it; we’ve shared a piece of it. And how would it feel? We’ll take that after the seasons over.”

With a 5-0 season, the Sachems future looks bright.

The playoffs are quickly approaching, and Head Coach, Steve Hayden, when asked if he thinks they will make a long run in the playoffs, said, “I just hope we play the best we can play, as hard as we can play, have fun, and be safe. What will happen, will happen.”