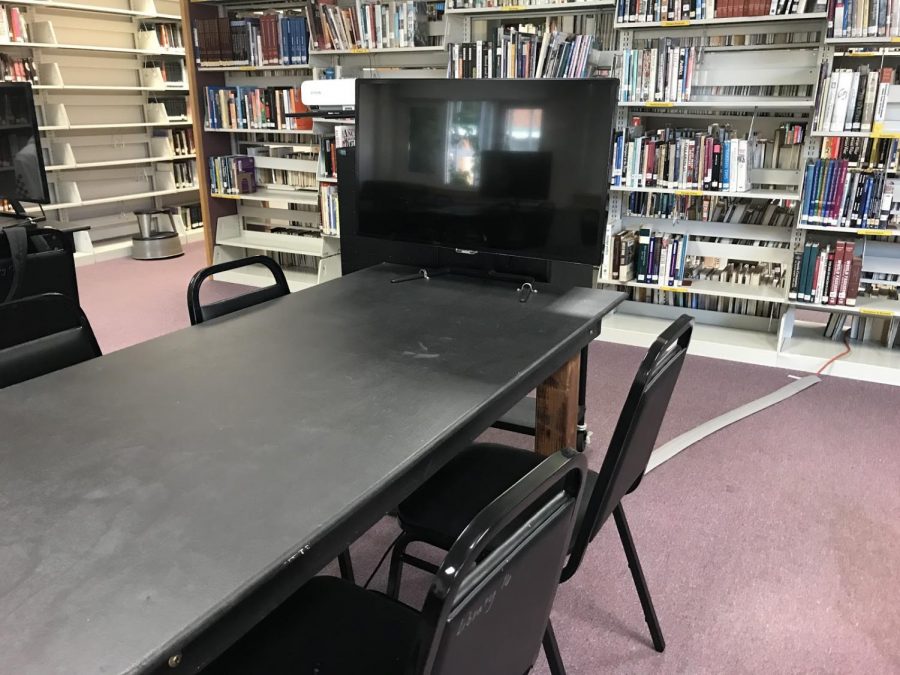 Ms. Costello, the librarian here at Pentucket Regional High School, has been working from the end of last year until now on, in her words, “weeding out” the non-fiction section and creating new community workplaces for students.

When Ms. Costello finally had time to work on the library she took the chance and made big changes.

Her work began by narrowing down the non-fiction collection in the library. The section had not been reduced in 12 years and many books were outdated and no longer needed by students. Ms.Costello decided whether or not to keep the books based on those guidelines and ended up consolidating them into two rows of bookshelves. Any books no longer needed were donated.

Also, a new addition to the library is the collaboration labs. Large monitors on the tables allow groups of students and faculty to connect computers to the monitors, giving every person a clear view of the screen. The monitors display a sizable reflection of what is already displayed on the small computers. Therefore, everyone in a group can see what is being done, hence the name, community labs. Ms. Costello mentioned that they are great for brainstorming and editing in groups, as well as a way to come together to work. Multiple classes can now be in the library at once because the regular monitors and the lab stations provide enough space for two classes.

Students and teachers alike have had positive reactions to the new improvements in the library. Ms. Costello said that the general response is an audible “wow!” because the library itself feels larger. The community labs usually cause people to question: “What are the monitors,” but people in the school seem to be drawn to them because they feel more intimate than the larger tables.

In fact, Pentucket STEM students actually made the tables for the community labs. By having STEM students build them, the school was able to save a generous amount of money, so financing was not too much of a challenge.

The problems came with getting the correct supplies. Ms. Costello ended up going to three different Home Depot’s before she was able to get all of the legs for the tables, but they were not sturdy enough. She ended up having to return everything she had bought herself. The district carpenters were kind enough to provide the rest of the supplies for the project and Mr. Seymour had it funded.

Ms. Costello refers to herself as “The Alchemist” because she can “make gold out of thin air,” and the library innovations she has introduced to the school bring that label to life.