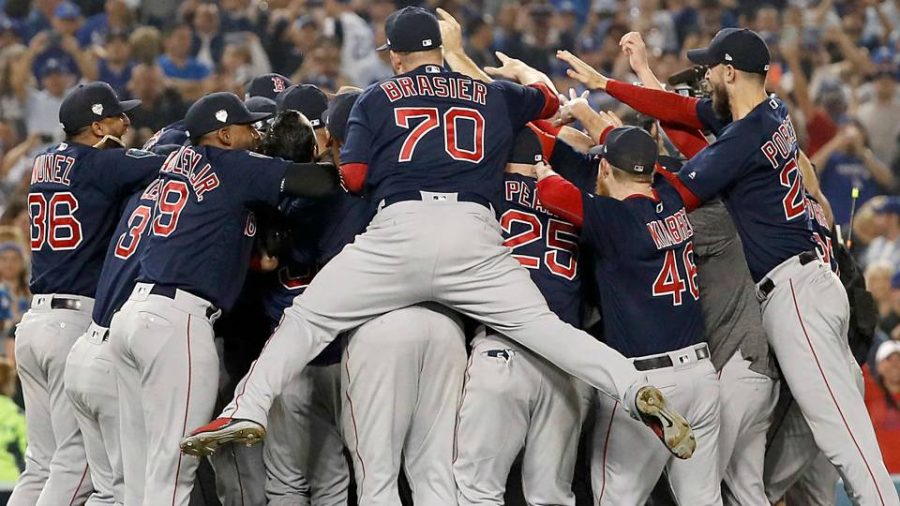 Claiming their fourth World Series title since 2004, the Boston Red Sox put together an amazing season. Under first year manager Alex Cora, the Red Sox put together a stellar postseason. In the American League Divisional Series the Red Sox defeated the Yankees, who had 100 wins this season and coming off of a strong Wild Card performance, 3 games to 1. After that, in the American League Championship Series, Boston beat the Houston Astros, another team with 100+ wins on its record. Winning four games to one after Houston swept Cleveland gave the Red Sox momentum going into the World Series, as well as home field advantage. Beating two 100+ win teams is an accomplishment in itself, yet the Red Sox stayed focused on games ahead against the LA Dodgers in the World Series.

Game one consisted of, the Red Sox taking the lead and the Dodgers coming right back to tie it up. This trend continued until the fifth inning when the Red Sox gained a lead and kept it, even adding three runs in the eighth inning with the Dodgers only scoring one run that inning. Those three runs came from Eduardo Nunez, who was hitting in place of Rafael Devers, and sealed the deal for a game one victory. Pitching was also key in this matchup. With both starting pitchers only going 4.0 innings, the bullpens were used early. Boston’s bullpen outdueled Los Angeles, throwing four shutout innings in game one.

Game two was low scoring with the final being only 4-2 in favor of Boston. A pitching duel from the beginning, David Price outpitched Hyun-Jin Ryu. Once both teams resorted to the bullpen, the runs had stopped. The Red Sox outpitched the Dodgers the whole night, only allowing three hits with starters and none once the bullpen and back-up pitchers were called.

The marathon that was game 3 lasted 18 innings, seven hours and 20 minutes. After the 13 inning, the Red Sox couldn’t manage to find a run. They scored in the top half of that inning, but the Dodgers came right back with a run of their own scored off of a throwing error by Ian Kinsler. The game ultimately ended with Max Muncy’s solo home run in the 18th inning. However, the Red Sox would make sure this would be the Dodgers’ only victory of the series.

Both teams started slow in game four, but that ended quickly in the bottom of the sixth inning when the Dodgers put four runs on the board. The Red Sox however, had an answer, scoring nine unanswered runs in the seventh through ninth innings. This scoring outburst started with a three-run homer by Mitch Moreland in the top of the seventh. That home run turned the tides and brought the Red Sox back into the game. Tying it up in the eighth was Steve Pearce, the series MVP, with a solo shot. They capped it off with a five-run ninth inning to close out the game. The Dodgers weren’t going down without a fight. They battled back for two runs in their last chance at bat, but it wasn’t enough and Boston took this game 9-6.

With the Red Sox one win away from being world champions, all eyes were on them. Coming into game five having a 6-1 record as the away team looked pretty good for Boston. Scoring two runs in the top half of the first gave the Red Sox some momentum, but the Dodgers came to play for the win, too. David Freese took David Price’s first pitch out of the park. However, that would be the only run of the game for the Dodgers. The Red Sox would go on to score one run in each of the sixth, seventh, and eighth innings. Every run in this game coming from home runs, both J.D. Martinez and Mookie Betts of the Red Sox scored solo home runs. The MVP of this game and eventually the series, Steve Pearce, hit two home runs as well. A two-run homer in the first inning and a solo shot in the eighth gave the Red Sox a win in game five 5-1, and the title of World Series Champions 2018.

The Red Sox took home their fourth World Series ring since 2004. With an amazing team filled with young talent and a promising coach, the Red Sox could be a competitive team for years to come.