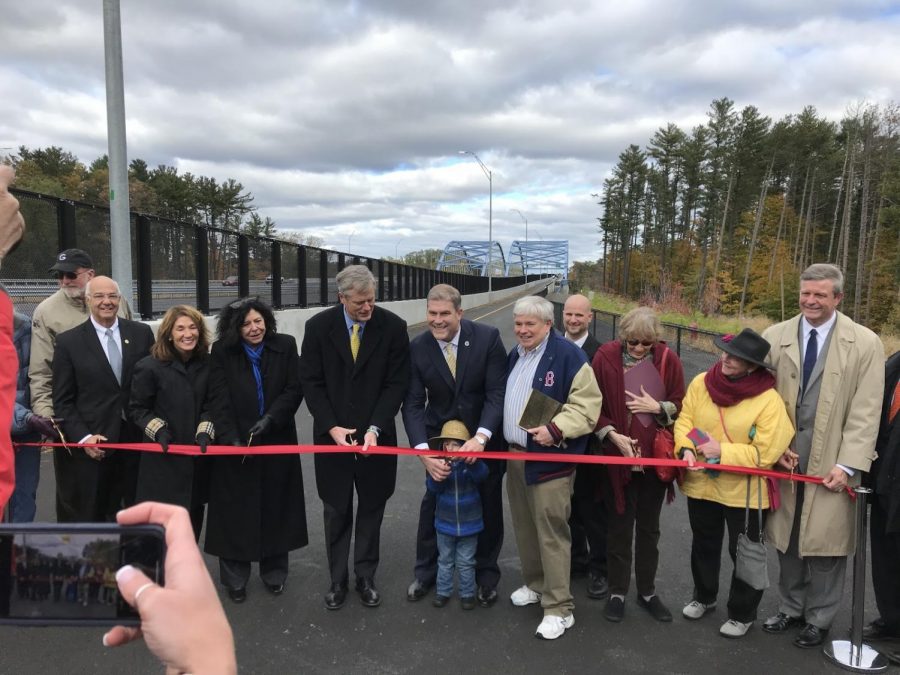 Of the most notable speakers was the governor. Baker said that the shared-use path and Whittier bridge represent, “a big step forward” for Mass transportation. He is pleased that MassDOT is beginning to engage in the trail business “in a big way.” Baker also praised the success of the Garrison path; over the past four years, he adds, there has been work done to connect many previously separate walking and biking paths all over Mass. He plans to fund many public projects like this one in the future if re-elected. After his speech, Baker introduced Lieutenant Governor Karyn Polito.

Polito called the bridge and trail projects “important” as well as “complicated,” and “one… that we are very proud of.” She also thanked the community and everyone involved who made the project possible. Polito promises that the state is always looking out for individual community needs and trying to find ways to bring each town’s plans and goals to life.

State Representative James Kelcourse, next to speak, was quick to thank the students at Pentucket Regional High School, River Valley Charter School, and Amesbury Innovation High School for their contributions to the state and nearby towns. “Because of these students, and their… hard work we have the Garrison shared-use path. And I am really, really glad to have been part of that process.” Kelcourse was the first government member to become involved in the students’ attempts to find a memorial for Garrison, and he was proud of the solution that the students found by working with government and MassDOT members to name the path.

The final speaker was the President of the John Greenleaf Whittier Home and Museum, Chris Bryant. She described the role of the Whittier Home as dedicated to keeping Whittier’s memory alive in this modern world. She introduced descendants of Whittier, one a young boy, who aided the various speakers in cutting the red ribbon to close the ceremony.

Edith Garrison is also happy with the accomplishment of the students in naming the path, and is glad that the tourist attraction that will spread information to visitors as they are “puttering around” the area. She understands that Garrison can be an inspiration even today, saying that all of his newspapers and writings from the nineteenth century are still applicable to our struggles in this modern-day.

The cousins talked about young Garrison as well. They said he was born to a poor family in Newburyport, Mass where he lived until he was 18 or 19 years old when he moved to Boston to start working to support himself. He began working for a newspaper, teaching himself to read and write. Garrison was always passionate about equality, pushing not only for abolition but for women’s suffrage as well. Frank Garrison called his great-great-grandfather a universalist, someone always “building bridges” to bring people together; it is fitting that his memorial became part of a bridge itself. Both Frank Garrison and Edith Griffin spoke of the inspiration Garrison was able to spark in others from his many writings, gathering supporters of his values and viewpoints.

This extremely eventful opening ceremony concluded with the cutting of a red ribbon, symbolizing the walking, biking, learning, appreciating, and memory making that is yet to come on the beautiful William Lloyd Garrison trail.