Listen To the Band! 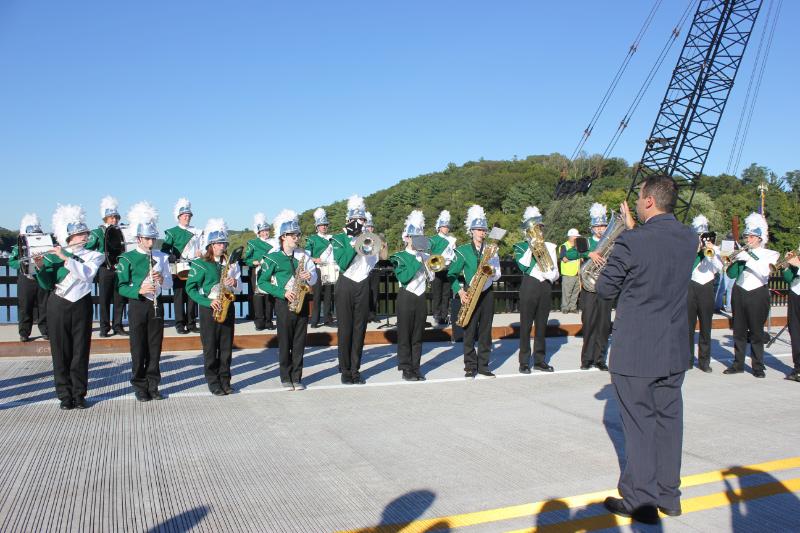 Football is a game that millions of Americans enjoy watching. Thousands of young men prepare with months of training, in order to get ready for the football season. The cheerleaders practice their tricks and memorize cheers. When football season begins, everybody is buzzing with excitement.

But what about the pep bands?

Chris McClelland, a Pentucket senior, said “I really only watch [the game] a little bit. If I hear the crowd yelling and screaming I may pay attention, but I don’t watch it for the most part.”

McClelland went on to say that playing the “Final Countdown” was his favorite part of the game. “It’s either that or when we play ‘Washington and Lee Swing’ because they’re both fun songs.”

The band conductors, on the other hand, have a different view.

Ryan Dymek, the bands Drum Major this year, says that he watches the football game for most of the time unless he is conducting the band. Dymek also claims that his favorite part of the game was “the excitement when they score a touchdown; the excitement when we play the school song.”

Band conductor Anthony Beatrice views the game experiences in an extremely optimistic light. Beatrice said, “We try to create a soundtrack to the football game. So, we will be watching the game and try to select music appropriate for that time.”

Beatrice also made the point that “it’s a great opportunity to show school spirit and support athletics at Pentucket while giving our students a chance to perform a variety of popular music.” He seems very content with having the band play at the Sachem’s home football games.

There are a wide variety of viewpoints about the games from the band. Some members get bored with the games, others take them very seriously.

Clarinetist Devin Young made it clear that he does not like the football games.

Young expressed his dislike, saying, “We don’t get to play nearly enough songs and band should just stand in the middle and play songs. The football players should go off and do their thing because people like awesome music instead of a testosterone fest.”

Young’s point of view is extreme; though there are others who would just rather talk to their friends in between songs instead of watching the game. Upon questioning, most of the bands actually don’t care for the games.

Some band members don’t even attend the football games. Sophomore Matt Deptula has not shown up to the football games so far this season and says “I am only going to the Thanksgiving are because those ones are fun.” When asked why he did not go to any of the previous games, he said “because they are boring as hell.”

Still, despite the attitudes of band members, the band adds a great deal to the football atmosphere. Imagine watching the Patriots play, yet not hearing exciting music to pump up your spirits every time they score. It would be a dull experience.